boudica.us@BoudicaU
The Dark Heart of the 20th Century Reflected in the Nagorno-Karabakh Conflict

The Dark Heart of the 20th Century Reflected in the Nagorno-Karabakh Conflict
Tucked away in the southern Transcaucasian highlands, which is the very headwaters of the Middle East, is a small country by the name of Armenia which parallels the history of Israel in many surpri… 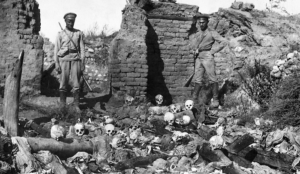 Tucked away in the southern Transcaucasian highlands, which is the very headwaters of the Middle East, is a small country by the name of Armenia which parallels the history of Israel in many surprising, striking ways. Armenians have inhabited this area of the world for thousands of years. They even claim Noah’s heritage as the famed Mt. Ararat dominates the skyline of Armenia’s capital, Yerevan.

In the first century B.C., the kingdom of Armenia set aside the Seleucid empire which had caused so much trouble to the small nation of Judea just to the south for well over 100 years. At this time, Armenia ruled from the Caspian to the Mediterranean until Rome squeezed them out of Syria or Cilicia in the 60s B.C. Later, Augustus Caesar used Armenia as a buffer state. It was the emperor Trajan who finally absorbed Armenia into the Roman Empire (114 A.D). A decade before Constantine took up the banner of the cross, Armenia became the first Christian nation in the world.

Though Armenian Christianity had some key theological differences with Eastern Orthodoxy, the Armenians flourished under Byzantium. However, they began to suffer at the hands of Islam during the crusades. After the conquest of Constantinople in 1453, Armenia had been under Islamic hegemony ever since – until the Ottoman Empire, along with its German ally, i.e., the Second Reich (1871-1918), collapsed in the aftermath of World War I. 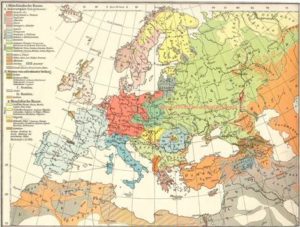 The map above is an old German ethno-geographic map depicting the presumed racial distribution of Europe and the Middle East at the outset of the Great War (1914-18). The publishing of this map reflects Friedrich Ratzel’s (1844-1904) blending of social Darwinism with what he called anthrogeographie. Ratzel viewed history as a biological theater of evolutionary geopolitics where the various races expand outward looking for geographical living space – all of which reflects the eugenic health of the nation. This blending later became more infamously known as lebensraum, or “living space,” through the rise of National Socialism, with no small thanks to the likes of Karl Haushofer (1869-1946) and Nazi deputy Führer Rudolf Hess (1894-1987), who helped convert Ratzel’s anthrogeography into Mein Kampf — which Hitler wrote while in prison for the Beer Hall Putsch in Munich in 1923. Hitler argued for the racial struggle of the Aryan victims against the backdrop of what he claimed was the unjust Treaty of Versailles and the international cabal behind it all, which he said was largely corrupted by Jewish communists and capitalists.

Closely connected to this was the fact that the Nazis were well aware of the Armenian genocide, which was perpetrated by the Ottoman Turks during the Great War. In 1915, at least 1.5 million Armenians were annihilated from what is today eastern Turkey in a racial cleansing operation of genocidal proportions. This was on top of previous and subsequent massacres of Armenians that sporadically occurred 20-30 years before the war. As the Ottoman empire was contracting, shrinking, and weakening during this time, it began to take out its frustrations against its own inhabitants. The Armenians were singled out as back stabbers, recalcitrant malcontents, and rebels whose shady business practices were highway robbery. Perhaps most shocking, it was the Young Turks, the presumed so-called moderate Muslims of the day, who carried out the Armenian genocide. However, the progressivism of the Young Turks was connected to European and German “scientific” social Darwinism and its geopolitical doctrines. 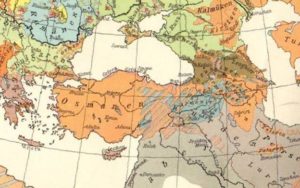 Indeed, the lower left part of the map highlighted directly above shows a big blue “problem” in what is called Armenia today. It stood directly in the way of the Ottoman Empire’s Pan-Turkish plans for the upper Middle East. It was during the Great War that the western blue-striped side of Armenia was completely wiped out during the Armenian genocide. However, at the very close of the Great War in 1918, with the Ottoman Empire in a freefall, the Armenians themselves had two decisive victories against the Turks at Sardarapat and Aparan, which saved them from further annihilation. While the Turks have not been back since, they still have Pan-Turkish plans to go from the Mediterranean all the way to Baku, Azerbaijan. Jihad Watch read more