At the second and final presidential debate, former Vice President Joe Biden went all in on climate change extremism. He promised to effectively put America’s oil industry out of business and declared Earth was facing the point of no return in “eight to ten years.”

President Donald Trump and even the liberal moderator, Kristen Welker of NBC News, caught the significance. 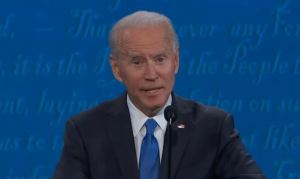 President Trump noted the gravity of his position, “That’s a big statement.” Biden agreed, and justified it by claiming, “we have to move toward net-zero emissions.”

Mr. Biden at the outset of the climate discussion said that climate change “is an existential threat” to humankind, and that Earth soon faces the proverbial tipping point, after which, presumably, we can do nothing…