Blog comment of the New Year. Make sure you are visiting Sondra, Doug and Claire over at Sondrakistan.

Sen. Kirsten Gillibrand (D-NY): “I don’t think there’s a human being alive in America today that could do a better job than Chuck Schumer in this moment to bring this country back together.”

Sen. Kirsten Gillibrand (D-NY): "I don't think there's a human being alive in America today that could do a better job than Chuck Schumer in this moment to bring this country back together." pic.twitter.com/lb2Bzbc24S

We have not verified the validity of this video clip

Germany: Muslim ‘known to police’ screams ‘I’ll kill you all, Allahu akbar,’ cops search for motive
“So far there is no information about the motivation.” Yeah, it’s a total mystery. No wonder authorities in the West are getting away with pretending that there is a “far-right” terrorism threat that…

“So far there is no information about the motivation.”

Yeah, it’s a total mystery. No wonder authorities in the West are getting away with pretending that there is a “far-right” terrorism threat that is greater than the jihad threat. When incidences of jihad happen, authorities pretend not to know what they are. 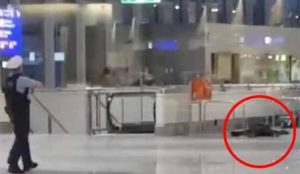 A man sparked a mass evacuation and armed response at a German airport when he shouted ‘Allahu Akbar’ after police confronted him for not wearing a face mask.

The 38-year-old man, from Slovenia, acted aggressively towards police at Frankfurt International Airport when police approached him for not wearing a face mask at around 5.16pm today.

The man shouted, ‘I will kill you all, Allahu Akbar’, before he abandoned his luggage and attempted to flee the scene.

Joe Biden wants to “heal a nation” after Donald Trump’s presidency. He has a very long putt in order to do that, and I’m not so sure that he actually understands what is involved in that. I could have said the same thing for Donald Trump four years ago. I don’t think he could have done anything short of resigning to appease the left, and I don’t think Joe Biden is going to be able to say or do anything to appease those on the right.

Having said that, here’s what you can expect from a Joe Biden presidency. Let’s see if you get “healed” after reading this.

Rejoin The Paris Accords: Yes, eco-terrorists the world over will love this one. Not so sure that people that have actually done their homework, and have realized that most of the scientists that came out in favor of working to get rid…

I have posted with some frequency the thoughts of those who point to impending Martial Law or some sort of organized Patriot uprising to save the American Republic from the obvious crimes of an election coup to enthrone an illegitimate President with a protected criminal past of corruption with so much stench that I am convinced treason was and is involved. TODAY it is my sense those voices telling Patriots that Donald Trump will prevail via one fashion or another was more akin to a delusional pipedream.

I don’t know if these voices for a Patriot America were simply fed a steady diet of deception to assuage Americans while the Marxist Left completes the tightening of the vice totalitarianism or – GOD FORBID! They were a part of delivering false hope.

Is the Establishment Planning a False Flag “Insurrection” for Inauguration Day? https://paulcraigroberts.org/2021/01/13/is-

Is the Establishment Planning a False Flag “Insurrection” for Inauguration Day?

The question in the title is legitimate in light of the extraordinary and unusal letter signed by all members of the US Joint Chiefs of Staff condemning Trump supporters for insurrection and calling on the US military to remain ready for another attempt at sedition on inauguration day.

In the Joint Chiefs’ own words: “The violent riot in Washington, DC on January 6, 2021 was a direct assault on the US Congress, the Capitol building, and our Constitutional process.”  https://www.rt.com/usa/512334-joint-chiefs-capitol-riot/

There was no riot, no assault on the Capitol, and no insurrection. As the videos show, there was no “storming of the Capitol.”  Police allowed rally attendees inside, and they walked in calmly in line.  (See, for…

The Real Nature Of Islam A PDF version of this article can be downloaded at the end of the text.

A while ago, on a BBC daytime TV discussion programme, Professor Richard Dawkins
extracted from an imam the admission that the correct punishment under Islam for apostasy is death – which is all you need to know to understand that Islam is a fascistic political ideology, not a matter of voluntary faith, and the enemy of human rights. The imam, uncomfortable about letting slip an inconvenient truth about Islam – and its refutation of the foundational human rights to freedom of speech and belief – disingenuously said that he didn’t know why Dawkins cared, since the penalty couldn’t be applied in a non-Islamic country like ] Britain. But of course he did know why we care about the death penalty for apostasy, and that for blasphemy, enforced by terrorism and fear in Europe – and about the thousands of other Islamic atrocities across the world, which continue year on year. We care because we care about all the suffering caused by human rights abuses. And because of a realistic fear among many of us that we too could be forced into submission to Islam.

Both jihad and Islamic laws sanctioning human rights abuses are enshrined in the Shariah, the Islamic code of government, law and social order, rooted in Islamic doctrine. Politicians and press interrogate the ideological roots of the rare instances of far-right terrorism, as they did after the appalling murder of 50 Muslims in Christchurch, New Zealand. But there is an almost surreal determination to avoid the same scrutiny of Islam after Islamic atrocities – and a disproportionate focus on reassuring Muslim communities after any attack perpetrated by Muslims. The official reaction calls Islamic terror “senseless”, averts attention from its Islamic features, and denies it has anything to do with “true” Islam. It’s based on misinterpretation, the “perversion of a great faith”. It’s attributed, if not to mental illness, then to “radicalism”, “extremism”, “Islamism” – the last of which used to just mean the practice of the doctrine ofIslam, but is now redefined as an aberration separate from Islam.

You can’t do this and be honest about Islamic doctrine, and its exposition in the Shariah. So, from fear and political calculation, no one asks whether Shariah itself is “a perversion of a great faith” – or rather the authentic expression of theocratic evil. Saudi Arabia, one of the world’s most egregious abusers of human rights, suppresses all opposition to its government and Shariah, regularly conducts public beheadings (37, and a crucifixion, in one day last year), and commits many other human rights abuses (including the horrifying treatment of migrant workers during the Covid crisis). But almost all of this is ignored, for political and economic reasons, and Saudi Arabia was accepted onto the UN Human Rights Committee, with the shameful support of our government – despite that country’s refusal to adhere to the UN’s own Universal Declaration of Human Rights, logically the minimum requirement for membership. For Britain read more

Bizarre. Kamala Harris & Dems want to send anyone in Capitol Building riot to prison for many years, but Kamala & her pals bailed BLM rioters out of prison & encouraged them to riot, loot, burn some more in name of “social justice.” Rioting is fine, as long as you’re a Democrat!

“We are as a people inherently and historically opposed to secret societies, to secret oaths and to secret proceedings.”

“The Pilgrims, after a year of hardship and peril, humbly and reverently set aside a special day upon which to givethanks to God …

I ask the head of each family to recount to his children the story of the first New England Thanksgiving,

thus to impress upon future generations the heritage of this nation born in toil, in danger, in purpose,

and in the conviction that right and justice and freedom can through man’s efforts persevere and come to fruition with the blessing of God.”

While visiting the home state of his Vice-President Lyndon Baines Johnson, November 22, 1963, John F. Kennedy was shot in Dallas, Texas.

The youngest President ever elected, being…