What the Democrats have done to this country using the China flu is a crime against humanity.
CDC Says Fully-Vaccinated People Can Gather Without Masks

Quick note: Tech giants are snuffing us out. You know this. Twitter, LinkedIn, Google Adsense permenently banned us. Facebook, Twitter, Google search et al have shadowbanned, suspended and deleted us from your news feeds. They are disappearing us. But we are here. Help us fight. Subscribe to Geller Report newsletter here — it’s free and it’s critical NOW more than ever. Share our posts on social and with your email contacts.

The Centers for Disease Control and Prevention (CDC) released a report Friday in which it quietly admitted that the mask mandates in America were allegedly responsible for less than a 2 percent decrease in COVID case growth after ONE HUNDRED DAYS. But still the CDC advises wearing masks, despite their own numbers. (READ: CDC Caught Inflating COVID Death Numbers By At Least 1600 Percent While Trump Was President).

The CDC claims that between March 1 and December 31 of 2020 the mask mandates, which were executed in the vast majority of United States counties, stopped COVID case growth rates by one half of one percent after 20 days and by less than 2 percent after 100 days. 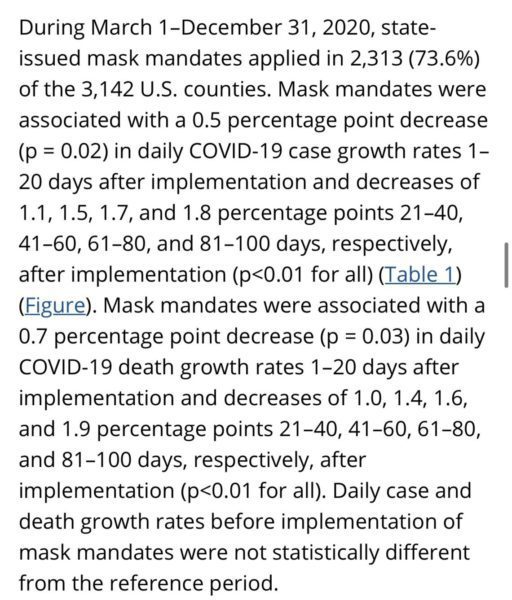 The CDC is now legally requiring red-blooded Americans to wear face masks on all public transportation as globalists try to push the concept of “double-masking” on the populace. Geller Report read more