EXPOSED !! THE FDA WILL NOT AUTHORIZE OR APPROVE OF ANY COVID-19 VACCINE !!

· Apr 4
They’re not “vaccine passports,” they’re movement licenses. It’s not a vaccine, it’s experimental gene therapy. “Lockdown” is at best completely pointless universal medical isolation and at worst ubiquitous public incarceration. Call things what they are, not their euphemisms.

This Tweet is misleading. Learn more about how vaccines work. 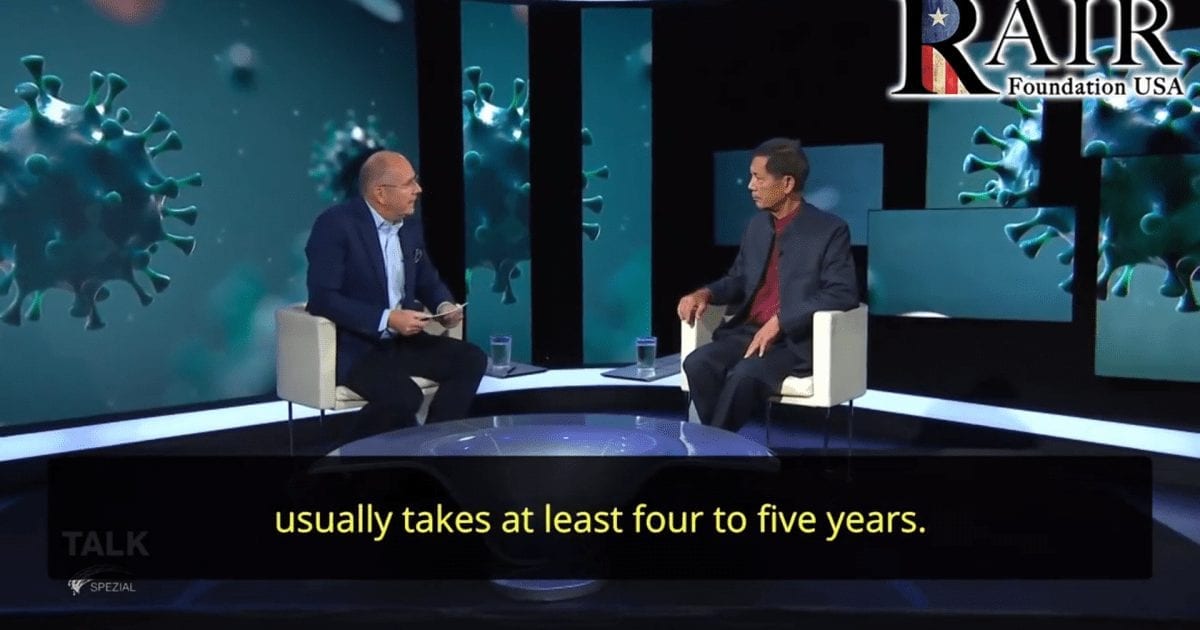 “The prominent physician dismisses the notion that a coronavirus vaccine so hasitily developed could be safe.”

In the following RAIR Foundation USA exclusively-translated video, German virologist Doctor Sucharit Bhakdi expresses deep suspicion of the vaccination development process in place for the Chinese coronavirus, which violates well-established scientific norms. The Doctor makes several very powerful points that should be considered by those touting a potential vaccine.

The former Emeritus Head of the Institute for Medical Microbiology and Hygiene at the Johannes-Gutenberg-Universität in Mainz, Germany explains that the scientific “standard” for vaccine creation is “four to five years.” The prominent physician dismisses the notion that a coronavirus vaccine so hasitily developed could be safe.

One of the most obvious points is that the vaccine is for an illness that has an incredibly low case fatality rate in Germany. “Among these 0 to 70 years, 0.7 percent died with and from COVID-19. 0.7 percent died,” he explains. But the real scandal is that these numbers are obscured from the public, in an apparant effort to make the disease appear more deadly than it actually is. Likewise, this author has looked for the mortality rate of the coronavirus in America by age and it is very difficult to find. “You won’t be able to find the answer, because you’ll only get an answer if you search the reports from the RKI [Robert Koch Institute] and calculate the number yourself.”

The doctor explains that the coronavirus is “about as dangerous as an influenza virus. A seasonal, moderate flu.” Doctor Bhakdi further explains that the vast majority of deaths are people who already have compromised health. As an individual over 70, the doctor explains that he is still not concerned, as he does not have co-morbidities. “I might be over 70, but I don’t have any pre-existing conditions, and if I wanted to, I wouldn’t die unless I threw myself down the stairs, out of desperation,” he said wryly.

As noted previously at RAIR, Dr. Deborah Birx in America stated during a press conference in April that “…if someone dies with COVID-19, we are counting that as a COVID-19 death.” With that in mind, it is certainly not a stretch to be highly suspicious of the death toll of the virus. In addition, the CDC guidance for reporting cause of death, “death certifiers” are advised on “proper cause-of-death certification for cases where confirmed or suspected COVID–19 infection resulted in death.” (author emphasis) This guidance has not been retracted.

A ‘completely new kind of vaccine’

Doctor Sucharit Bhakdi makes an incredibly powerful statement while explaining that the vaccine being developed “isn’t a normal conventional vaccine, and it’s not like the flu vaccine.” He says that the vaccine is “gene-based,” and the way it works is “still unknown scientifically and medically.” While many people have fought against genetically modified food, the Virologist explains, “we’re [now] talking about a vaccination that genetically manipulates the human body, and apparently these same people have no concerns about it.”

The doctor explained very simply that all people have “lymphocytes,” the body’s natural defense against viruses, including the Flu. It is a basic “principle of immunology,” he explains. “I believe it has always worked and that’s the reason why we as adults are relatively well-protected,” Bhakdi said. “If you are under 70 and not seriously ill from anything else,” the lymphocytes will do their jobs.

However, if one uses the vaccine to “inject the gene of the virus,” the lymphocytes “won’t recognize that it is only the gene that was injected and not the virus.” The result, he explains, will be that the lymphocytes “will go there anyway and kill these cells.” Bhakdi continues: “That’s what we call an autoimmune reaction.”

As to the lastest leftist assertion that there are “increasing numbers of long-term consequences for corona patients,” Doctor Sucharit Bhakdi said: “It isn’t possible to form an opinion, because there are no data at all.”

WARNING about the Coronavirus Vaccine!

For months at rairfoundation.com we have translated his videos for our viewers RAIR Foundation read more

Actions
Hurray for fossil fuels! They have provided the human race with clean drinking water, food, clothing, homes, electricity, sewage treatment, extreme-weather mitigation, and the distribution of necessities. In the past 30 years, they have helped lift an entire quarter of the Earth’s population out of extreme poverty. In The Moral Case for Fossil Fuels, Alex Epstein points out that “global malnutrition and undernourishment have plummeted—by 39 percent and 40 percent, respectively, since 1990 .

Climate alarmists are obsessed with taking CO2, now at 418 parts per million (ppm), back to a pre-industrial level—perhaps to 280 ppm, where it was at 200 years ago. But why stop there? If they want to restore the Earth to its pristine condition before man ever walked on it, why not take CO2 back to the level it was at 500 million years ago? You might be surprised to learn that back then CO2 was at 5,000 ppm.

WARNING: Head of Gov’t Health Agency Admits in Advance: People will Die From the Vaccination (Video)

The German federal government is preparing citizens for the inevitable deaths that will take place due to the Chinese coronavirus vaccine. The head of the German equivalent of America’s Centers for Disease Control and Prevention (CDC) assured the population that the “statistically very probable” deaths will most likely be attributable to “pre-existing conditions” instead of the vaccine.

People walk in front of a currency exchange shop in the Iranian capital Tehran on August 8, 2018. (AFP PHOTO / ATTA KENARE)

WASHINGTON (AP) — The Biden administration is considering a near wholesale rollback of some of the most stringent Trump-era sanctions imposed on Iran in a bid to get the Islamic Republic to return to compliance with a landmark 2015 nuclear accord, according to current and former US officials and others familiar with the matter.

As indirect talks continue this week in Vienna to explore the possibility of reviving the nuclear deal, American officials have become increasingly expansive about what they might be prepared to offer Iran, which has been driving a hard line on sanctions relief, demanding that all US penalties be removed, according to these people.

American officials have refused to discuss which sanctions are being considered for removal. But they have stressed that they are open to lifting non-nuclear sanctions, such as those tied to terrorism, missile development and human rights, in addition to those related to the nuclear program.

Biden administration officials say this is necessary because of what they describe as a deliberate attempt by the Trump administration to stymie any return to the deal. Under the 2015 agreement, the United States was required to lift sanctions tied to Iran’s nuclear program, but not the non-nuclear sanctions.

Abbas Araghchi, political deputy at the Ministry of Foreign Affairs of Iran, is leaving the ‘Grand Hotel Wien’ after the closed-door nuclear talks in Vienna on April 16, 2021, where diplomats of the EU, China, Russia and Iran hold their talks. (JOE KLAMAR / AFP)

When former president Donald Trump re-imposed sanctions after withdrawing from the deal in 2018, he not only put the nuclear sanctions back in but also added layers of terrorism and other sanctions on many of the same entities. In addition, the Trump administration imposed an array of new sanctions on previously unsanctioned entities.

This has put the current administration in an awkward position: Iran is demanding the removal of all sanctions. If the US doesn’t lift at least some of them, Iran says it won’t agree to halt its nuclear activities barred by the deal known as the Joint Comprehensive Plan of Action, or JCPOA.

But if the Biden administration makes concessions that go beyond the nuclear-specific sanctions, Republican critics and others, including Israel and Gulf Arab states, are likely to seize on them as proof that the administration is caving to Iran. Former secretary of state Mike Pompeo has led the charge among Trump alumni to denounce any easing of sanctions. warsclerotic.com read more

It is a good thing to look around the country and see what others think. In My Father’s House | “…that where I am you may be also.” Jn.14:3 (wordpress.com) is a blog written by a pastor. Pastor Mel Wild leads Cornerstone Church – Home (thatchurchonthehill.com). Pastor Wild’s blog generally focuses on preaching the Gospel, but he has written posts that address critical political issues. Here are two that talk about the state of our public schools.

I took some time to read and look up some of the claims in these posts. For example in…

So, Joe Biden put V.P. joke, Kamala Harris in charge of the Southern border! She is doing exactly what Biden wants, expected! NOTHING! They wanted a crisis, they got a crisis and they are just fine with the way things are going. Kamala Harris is taking on the Vice Presidency in nearly the same manner Joe Biden served as VP. Worthless, except for building his own wealth. Notice too how Biden avoided the border in his address to the members of the “JOINT” Congress.

I found this on Social Media (of course one not associated with Big Tech) and can’t remember who shared. Sorry about that if that person views this post.

AND SO … I am pleased to reside in the State of Oklahoma where the State Congress and Governor appear to be on board to resist the tyranny of the Beijing-Biden Dem-Marxist fraudulently elected regime. CHECK OUT THE RESISTANCE (so far).

As if the election of the century ignored by all levels of America’s Judicial system was not bad enough, it is now apparent race baiting Dem-Marxists under the guise of Black Lives Matter ignores reasonable doubt evidence in the Courts. Justin Smith examines.

A Pre-Ordained Guilty Verdict and the Subversion of America –

“Wish I could score an interview…