On Friday, during a press conference in El Paso, Texas, alongside Harris, Mayorkas said he was “hopeful” that an amnesty for illegal aliens would be approved by Congress.

“I am hopeful that Congress will pass immigration reform to fix a system that everyone recognizes is broke and I am thankful for [Sen. Dick Durbin’s] years-long effort and championing this effort,” Mayorkas said.

Mayorkas also suggested that the role of DHS, under his and President Joe Biden’s direction, is “to build safe and legal pathways for people” to stay in the U.S. indefinitely — a stark contrast to former President Trump’s DHS, which sought to stem illegal immigration and drug trafficking.
https://www.breitbart.com/politics/2021/06/25/dhs-secretary-mayorkas-uses-border-visit-to-tout-amnesty-for-illegal-aliens/

The New American Published June 28, 2021
Rumble — Deep State puppet Trojan horse Joe Biden signed a “New Atlantic Charter” that lays the groundwork for more globalism and Big Government, warns Behind The Deep State host Alex Newman in this episode. The new charter, a play off FDR’s “Atlantic Charter” with Winston Churchill, calls for all the globalist Deep State’s policies to be implemented internationally. The plan also calls for stepping up the fight against critics of this diabolical agenda.

I first posted the article that is the basis for this article—Self-Defense In A Reimagined World—on October of 2020.  I resurrect few of my older articles, and don’t usually update any for several years after I originally posted them, but times are moving fast, and it’s already time to update this one.  It’s a topic I can’t emphasize enough.

What happens to the law of self-defense when the police cannot or will not do their jobs? 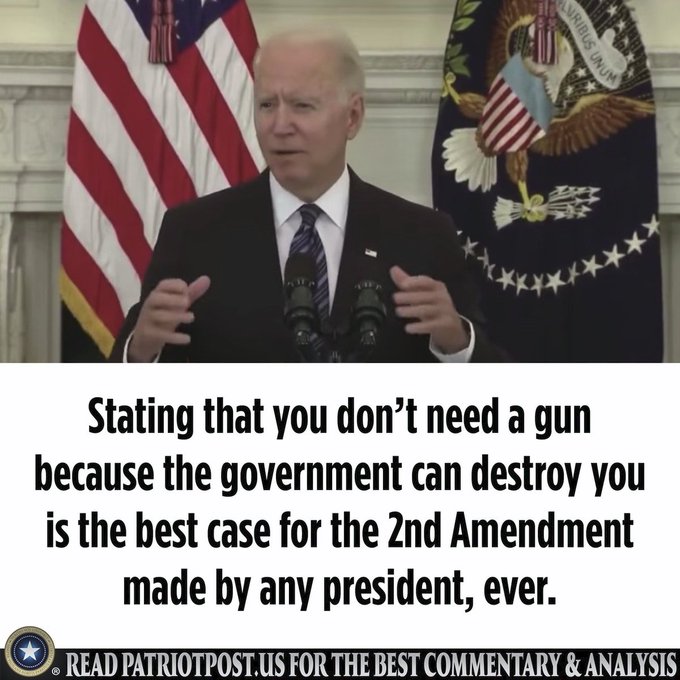 Rumble — Fox News host Tucker Carlson blatantly accused CDC Director Rochelle Walensky on Wednesday of downplaying the risks of teenagers getting the COVID vaccine which has been linked to heart inflammation in adolescents and young adults.

Or at least that’s what the Supreme Court ruled last week. The high court heard the case of a Pennsylvania High School cheerleader who used vulgar language to criticize her school on social media. The school, once they learned about the incident kicked her off the cheerleading squad, so she sued, saying that she wasn’t on school grounds, and the school had no right to go after her.

Apparently the High Court agreed. They voted in favor of her ability to trash the school away from the school by an 8-1 vote.

Frankly, I can’t believe that a school district would have the audacity to want to kick someone who was speaking critically about them off of the cheerleading squad. That sounds very authoritarian and rather czaristic if you ask me. We DO have a freedom of speech in this country. Now, we all get it that it doesn’t extend…

(The Democrats are bringing down our country – within.)

An American flag is lit by the sun on Flag Day, June 14, at Crest Lake Park in Clearwater, Fla.

President Biden likes to exclaim that “America is back,” but Nicholas Kristof begs to differ in his latest New York Times column. He ticks off example after example of how the US is lagging other nations in crucial ways.

(Google won’t allow the flag to be copied because it is upside down which means we are in distress.)

“Greeks have higher high school graduation rates,” he writes. “Chileans live longer. Fifteen-year-olds in Russia, Poland, Latvia, and many other countries are better at math than their American counterparts—perhaps a metric for where nations will stand in a generation or two.” We similarly lag in reading, and in international comparisons…

I know there is a group of American Patriots who have placed their trust in behind-the-scenes political Patriots and Military Patriots who will oust this current election coup and restore Constitutional integrity. For me that has all the appearance of a pipe-dream. ONLY We-The-People willing to actively resist (peace first – might when necessary) the Dem-Marxist fundamental transformation away from American Freedom and Liberty will be able to preserve the Founders’ Republic. I for one am prepared to be labelled one of Beijing Biden’s domestic terrorists for simply refusing to obey godless laws AND refusing to allow my Natural Rights to be infringed. CONSIDER:

Donald Trump Says 2024 Decision to run for president will ‘possibly’ Come After 2022 Elections.

This doesn’t sound like he is planning to run for president in the 2024 elections.

As stated before, he doesn’t want to tip his hand to early, which is complete nonsense.

Then again his ego is so large he might well run with with the Governor of Florida,Ron DeSantisjust to get elected and then turn the reins over to Governor DeSantis during the next 6 months to a year, proving he could win again.

The Democrats who stole the election and impeached him in the house twice have all the material they need to run against the former candidate.

One problem, make that two, they don’t have a candidate or platform that voters could believe.

I mean taxing the rich so they pay their “Fair Share,”…