revolt against the new world order!

The illegitimate regime is tough and vicious on Americans but sniveling snakes with our enemies.

Apparently for the Democrat party, Americans in body bags are preferable.

Biden feared a “Black Hawk Down” moment if US troops went out in the streets of Kabul and were killed or injured by the terrorists.

America took a giant step Monday toward extinguishing what’s left of freedom and setting up a bifurcated society in which at least a third of its population gets treated as second-class citizens unfit for employment, buying or selling.

Revolt throw all the bastards out’ 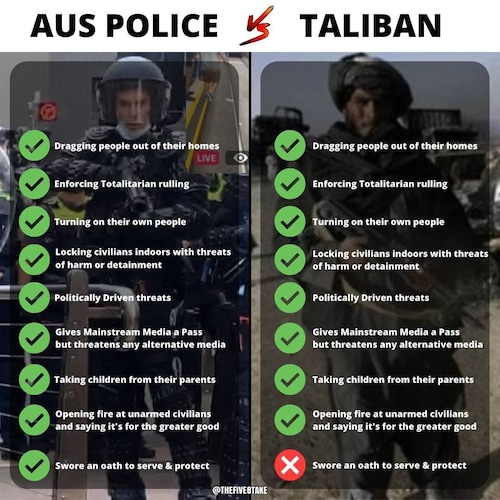 Rumble — From Tunisia to Italy to Greece to Thailand and all parts beyond, humanity is pushing back against the botched overreach agenda into fundamental individual rights. The police are standing down and joining protesters in some protests. While delivering the brutal totalitarian bidding in others. Meanwhile, the leaders of the crackdown on human freedom reveal their own incompetence and detachment. Back in the United States the message from the Biden Administration has driven those expressing their First Amendment to be beaten in the street by the zombies of Marxism.

If you choose to get this vaccine, you are literally playing Russian roulette with your life.

Not since the stolen elections of 2020, which put the fraud and his socialist/Marxist Klingons into the White House has our country been raped by Joe Biden who never served a day in military service and seriously needs the most severe of punishment the law will allow.

I’m talking about all of them, not just Joe but his co-conspirators as well.

A windfall for the Taliban.

Afghan Taliban fighters are seen on a military vehicle in Kabul, capital of Afghanistan, Aug. 16, 2021. (Photo by Str/Xinhua via Getty Images).

The Biden administration admitted on Tuesday that the Taliban had captured a significant amount of U.S. military equipment originally supplied to Afghan security forces during the militants’ blitzkrieg on Kabul in recent weeks — and the U.S. doesn’t know exactly how much American gear they’ve lost…

Against overwhelming odds the U.S. military is ready and able to do the job to bring the last American home.

Qualification to attempt to be a member of Force Recon.

The United States Marine Corps is a unique branch of the military that is extremely elite and fierce.

Within the Marine Corps lies a special MOS that is even more elite and fearsome, U.S. Marine Recon. MOS 0321 is the designation for Marine recon.

What exactly is Marine reconnaissance?

It is a MOS that is very difficult to be selected for and it is one of the most challenging and high-speed career options that the USMC has to offer.

Recon Marines are warriors who aren’t afraid to fight in the shadows or go to locations where others refuse to venture.[Source]