COVID! Wake up, think. Do not blindly. comply.

WHY REGAINING OUR FREEDOM IS DOWN TO A SIMPLE CHOICE

WHY REGAINING OUR FREEDOM IS DOWN TO A SIMPLE CHOICE

IT is hardly rocket science to arrive at the following realistic, nightmarish conclusion: with a faux rightist and a post-Zionist/leftist at the helm, respectively, Bennett and Lapid, dependent upon the titular head of the Islamic Muslim Brotherhood Mafia as its “saving grace” to prop it up, what rational thinker would assess that this disastrous duo are up to the task of bombing Iran’s “zero-hour” countdown nuclear facilities? Atop the aforementioned catastrophic scenario, does anyone really believe that the very same captive-held, musical-chair partnership will also thwart the Biden regime’s dictate: hands-off Iran’s nuclear program! For heaven’s sake.

IN this regard, once you couple said realistic starting points — again, considering the fact that PM Bennett signed a blood-laced deal with the Islamic Brotherhood devil to become PM — well,

The Internet of Senses And The Zombie Apocalypse

boudica us Published November 23, 2021 7 Views
Rumble — The Internet of Senses And The Zombie Apocalypse
The Crowhouse

The decline of America and the West is beginning to accelerate and people have become almost numb to the madness all around them.

Child Masking Is Unnecessary & Harmful
Healthy children are not dying from COVID, there are numerous non-vaccine natural and pharmaceutical treatments that prevent injury and death from COVID infection, asymptomatic children do not spread COVID, masks do not stop COVID or other virus transmission, masks cause learning difficulties in school and other settings, and masks cause real world physical and psychological harm to children. The experts in our video – including child psychiatrist Mark McDonald, MD and family physician Jeff Barke, MD of America’s Frontline Doctors – share peer reviewed studies, scientific evidence and clinical experience that masks are useless for virus control and can cause dramatic harm to children. Dr. McDonald says, “We’ve known for over a year that children are essentially unaffected in any real meaningful way by this viral pandemic, and for that reason, there is no need to place any additional protective measures on them such as mandatory or even optional mask wearing.” Watch the video to fully understand why child masking should cease immediately.

End Outdoor Child Masking
In the video we place emphasis on why to end outdoor masking because this is where you, as a parent, have total control over your child and the mask situation. This is where you can take action and have an immediate effect on your child’s well-being as well as make a statement to others that your child will not be subject to fake science and politics and that instead you will put your child first. If you’ve masked your child outside, you now have all the information you need to confidently stop doing this immediately.

Challenge Indoor Mask Mandates
Watch the video. Read our Mask Report. Take notes. And then go to your school board, call your legislators, talk with business owners, and challenge mask mandates everywhere. Get involved. This website and video was created for YOU, the PARENT. Protect your child by standing up for what’s right. Join our censorship-free communities to talk with like-minded parents and subscribe to our email list for ongoing updates.

With U.S. Foreign Policy In a Shambles, Secretary of State Blinken Finds Something to Celebrate 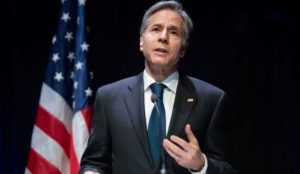 My latest in PJ Media:

Those who helped us out during our long military misadventure in Afghanistan only to be left behind in Kabul know that Joe Biden’s handlers are not the most reliable people in the world, but there is one thing they can always be counted on to be, and that is tone deaf. And so on Sunday morning, Secretary of State Antony Blinken looked out on what he had wrought. He saw China emboldened, Afghanistan lost, and Iran more aggressive than ever, and he took to Twitter to give us the perfect response to all the fires he and his colleagues have started or made rage hotter than ever. He tweeted: “Humbled to reach one million Twitter followers as Secretary of State — and especially so because it means that I can share the outstanding work of our @StateDept team with so many at home and around the world. It’s a privilege. Thank you.”

The “outstanding work” of our State Department? You have to admire the man’s chutzpah. To head the State Department during Joe Biden’s dumpster fire regency for Kamala Harris, with the Taliban enjoying billions of dollars’ worth of American military equipment, and China sending increasingly threatening signals about invading Taiwan, and the Islamic Republic of Iran growing more belligerent by the day, and to claim in the face of all that and more that the department is doing “outstanding work,” takes an oddly audacious dishonesty, or a resolute determination to deny the evidence of one’s senses, or both.

Even the fact that Blinken thinks that gaining one million Twitter followers is some kind of affirmation is ridiculous in itself and raises inevitable questions about the man’s priorities. Jihad Watch read more

Suit To Be Filed Against CNN For Illegally Targeting Children

boudica us Published November 23, 2021
Rumble — BREAKING – Suit To Be Filed Against CNN For Illegally Targeting Children