A US official said Saturday that Iran had backed away from all its previous compromises on reviving the 2015 nuclear deal and that the US would not allow Iran to “slow walk” the international negotiations while at the same time ramping up its atomic activities.

The warning came a day after Washington hit out at Iran, saying talks with world powers on a return to the 2015 nuclear accord had stalled…

Here’s hoping it was a big one, and due to the efforts of Mossad…

Conflicting reports emerge about nature of the blast, which occurred as Tehran is negotiating to restore 2015 nuclear deal

TEHRAN, Iran — An explosion shook the area nearIran’s mainnuclear-enrichment plant late on Saturday, prompting conflicting explanations from Iranian officials as Tehranengages in talks with world powers over its nuclear program.

The blast was heard in the area of Badroud, around 12 miles from the Natanz nuclear site, according to IRNA, Iran’s state news agency. The incident involved a sound and then a flash of light in the sky, reported Fars News Agency, an organization close to the Islamic Revolutionary Guard Corps.

Natanz has been the site of attacks and sabotage in the past, but Iran didn’t immediately place blame on any foreign government and sent…

Prime Minister Naftali Bennett said Sunday that Iran must be penalized for violating the nuclear deal, and that Tehran must be told it cannot hold negotiations for a potential new agreement while it continues to enrich uranium.

“Iran must start paying the price for its violations,” Bennett said at the opening of the weekly cabinet meeting, as he called on those engaged in talks with Tehran to “stick to a firm line and make it clear to Iran that it is impossible to simultaneously enrich uranium and negotiate.”

Bennett also said that the Iranians were negotiating “skillfully.”

“The goal of the Iranian regime…

President Isaac Herzog meets with incoming US Ambassador to Israel Thomas Nides on December 5 in Jerusalem.

srael will act againstIranon its own should the international community fail to thwart Tehran’s nuclear ambitions through diplomatic means, President Isaac Herzog warned the United States on Sunday.“If the international community does not take a vigorous stance on this issue, Israel will do so. Israel will protect itself,” Herzog told US Ambassador to Israel Thomas Nides during a small ceremony in which he accepted the American diplomat’s credentials.The two men met just two days after theseventh round of indirect talks between the US and Tehranto revive the 2015 Iran deal, also known as the Joint Comprehensive Plan of Action (JCPOA) appeared to end in failure.Iran and the European Union have spoken of renewed talks… 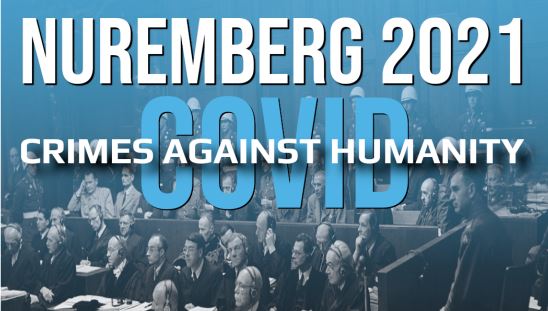 NUREMBERG-2021: CRIMES AGAINST HUMANITY. by :The-Great-Work

The DOCUMENTED data is official. VAERS show adverse reactions from COVID-Jab in the last 11-months than all the rest (legit non-mRNA) vaccine adverse reactions the last 30-years. AND WE ARE STILL told the LIE mRNA Jabs are safe and effective with one-time Free-World imposing tyrannical Jab mandates.

Vaccine Cult Exposed by Government’s Own Data: More than 50% of ALL Vaccine Adverse Reactions Reported for Past 30+ Years Have Occurred in Past 11 Months Following…

Murdering the Unborn Child is a practice as old as mankind itself, but that doesn’t make it a moral practice or something acceptable with any real justification. The Democratic Party’s century long…

Thanks to some Wimkin Social Media Platform sharing I discovered this Vic Freeman post offering a peaceful yet robust John Galt-like plan for American Patriots to stand up and resist Dem-Marxist Medical Tyranny.

I’m not sure it will function as well as in Ayn Rand fiction NEVERTHELESS, it is a great beginning better than sitting on your hands complying to every tyrannical edict coming down the pike from American despots (as in Let’s Go Brandon).

Or if not donating you can support by getting in the Coffee from home business earning yourself extra cash – OR just buy some TASTE GOOD healthy coffee, that includes immune boosting products. Big Tech Censorship is pervasive – Share voluminously on all social…

All Of The Corrupt #CEO’s Are STEPPING DOWN Right Before 2022. Just Like They Did In 2019, Right Before The Covid Mess.

They seem to ‘step down‘ before something HUGE is going to happen.

Why Did SO Many CEOs ‘Resign’ During #DOW Dump? #Coronavirus News Hoax

PREPARE FOR GOD ONLY KNOWS WHAT.

Antifa Member Who Took Axe to Senate Office Given Probation and his Axe Back. As Jan 6th Shaman Gets 42 Months Posing For Pictures:

Again, I ask the LORD to destroy our government. See here at JonathanTurley.org

THIS is OKand will only get you probation:

This is NOT OK and will get your prison:

I curse every, single Leftist in America and ask GOD to deal harshly with ALL of them in Jesus name.