Our Leaders Are Out Of Control

boudica us Published February 28, 2022
Our Leaders Are Out Of Control
https://brittpettibone.com/ 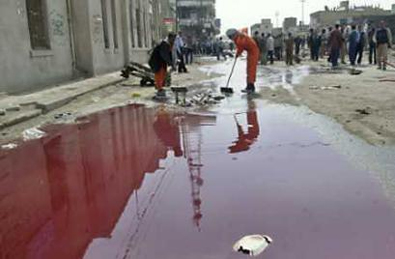 THREE SIDES TO EVERY STORY

THREE SIDES TO EVERY STORY 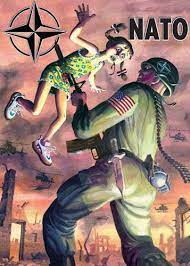 32 years ago this month the George H.W. Bush administration promised

the Russian government that if Russia surrendered East Germany,

NATO would not “expand one inch eastward.”

President Biden has declared that Vladimir Putin’s invasion of Ukraine will bring about a “catastrophic loss of life.”

Mr. Cheney was enthusiastically applauded in Congress as recently as last January 6.

Condoleeza Rice is a well-paid “expert” commentator on Russia and Ukraine featured prominently in the US media that proudly employ her.

Joe Biden fully supported the bloody war crime invasion of Iraq, a nation that had not harmed America. Mr. Biden and the US ruling class are corrupt hypocrites. Putin will not be lectured or morally blackmailed by mass murderers pointing fingers at him.

Moreover, 32 years ago this month the George H.W. Bush administration promised the Russian government that if Russia surrendered East Germany, NATO would not “expand one inch eastward.”

That trick was played on the Russians by the cunning US Secretary of State James Baker, the Jimmy Savile child molestation facilitator Margaret Thatcher of Britain, and West German Chancellor Helmut Kohl. With supreme treachery, Presidents Bill Clinton and George W. Bush subsequently pushed for the maximal expansion of NATO, in violation of the promise given to Russia. This is a major source of Putin’s grievance at present. 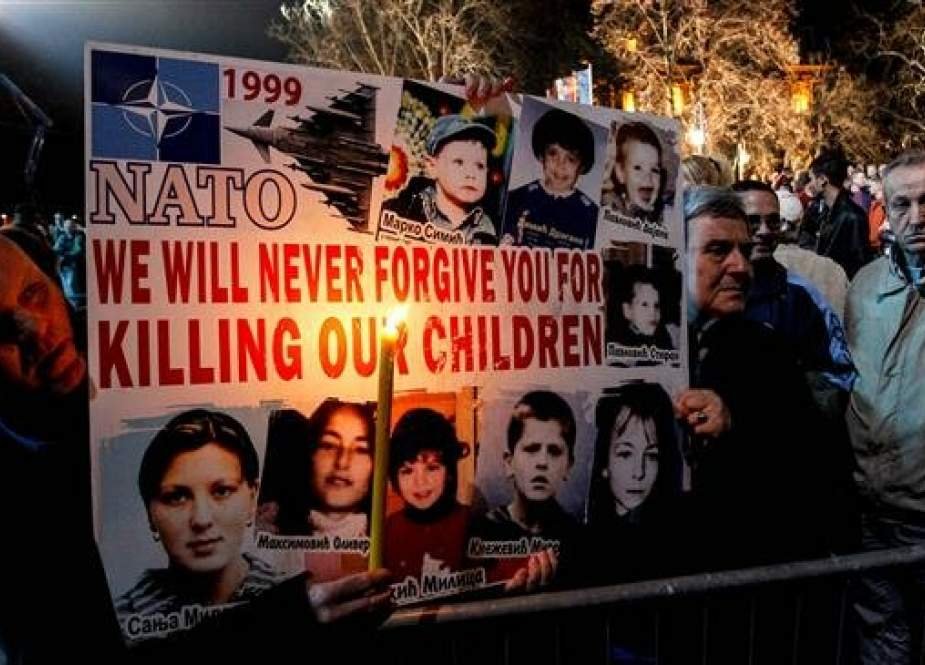 Another root of his casus belli can be traced to1999, when, with the avid assistance of President Bill Clinton, the NATO we are expected to believe is the guarantor of lofty virtue and blissful peace, carpet-bombed the Christian nation of Serbia for two and one-half months, bombing churches, schools and the civilian centers of Serbian cities, and refusing a humanitarian cease fire even for Easter (see here, here and here). Inflicting so-called “moderate suffering” on the civilian Orthodox Christian population suited NATO planners, as well as Mr. Clinton, and NATO’s US commander, Wesley Kanne Clark.

In 2011, at the urging of US Secretary of State Hilary Clinton, NATO bombed the African nation of Libya and facilitated the torture-death of Muammar Gaddafi (sodomized with a bayonet), to the delight of Mrs. Clinton who expressed joy over the sadistic savagery:

“Secretary of State Hillary Clinton shared a laugh with a television news reporter moments after hearing deposed Libyan leader Muammar Qaddafi had been killed. “We came, we saw, he died,” she joked when told of news reports of Qaddafi’s death by an aide in between formal interviews.” [Source: CBS News, October 20, 2011]

Near total amnesia about NATO’s horrific war crimes and the depraved American and European malefactors who perpetrate them has been induced by the corporate media. The Russians have not forgotten, however.

The historical illiteracy of Americans is cringe-inducing. On Fox News on the evening of February 23 the host of the program stated that Russia’s entry into Ukraine was tantamount to Canada invading the American Midwest.

Madame, the midwestern United States was never part of Canada, but the Viking Rus did found the Russian nation more than 1,000 years ago, in Kiev.

Ukrainians and Russians have mutual interests and kinship across centuries. An alien wedge has been driven between these kindred peoples by an Anglo-American/European Babylon fronted by Brussels and NATO, and fuelled by CIA and MI6 misinformation, infiltration and subversion. Henry Makow read more

PUTIN IS LYING……….SURPRISE, SURPRISE. His reason for invading the Ukraine wasn’t to keep them from joining NATO, though that is true……he doesn’t want them in NATO. His reason for that too is a lie, it isn’t because the Ukraine would be a threat to Russia if they joined…….(except it gives Ukraine more security) it is because it strengthens the Ukraine’s security, places them under the belt of the NATO nations. Putin does not want a secure Ukrainian existence. He wants them to always live in fear, fear of him! Bottom line, reason for invasion is to draw the Ukraine back into the map/boundaries of Russia. He wants back what he lost when they were the USSR. (Arlin Report comment)

Things didn’t go well for Russia while they were in Afghanistan.

Putin is now being embarrassed by civilians in the Ukraine. He is meeting a greater force than he anticipated. He has underestimated the resilience of Ukrainians. Putin thought taking back the Ukraine was going to be easy with his “PEACEKEEPING FORCE”. It is not a peacekeeping force……..that was Putin bullshit. You have to question the will of Russian soldiers to really fight Ukrainians; after all Putin said that Russian and Ukrainians are one people. It that were really true……Russian soldiers would defy even Putin. Putin can not leave the Ukraine (if he ever does) without fully achieving his goal ……….or HE faces total embarrassment (globally). This is not a rap against the Russian people, even the soldiers……….Putin lies to his own people as much as, if not more than he lies to the world. That would include CHINA!

I am very knowledgeable on the S.W.I.F.T. financial system. I worked in the international department of a major U.S. bank for nearly 15 years, using the SWIFT system daily……..pretty much all day long.

Expelling Russian banks from the SWIFT system could/would have a huge impact on Russia’s ability to conduct business, government and private. However, expelling some banks………does not cut it. All Russian banks with SWIFT access need to be expelled. Russia can dance around the banks expelled……use ones that have not been. Too, Russia could use other foreign banks in China who are sympathetic to them; while some banks in Russia still have SWIFT access. Those Russian banks still with access can merely send messages/transactions to China and ask them to forward to their desired bank (foreign banks) destinations. Yes it complicates Russia’s ability to communicate with foreign banks, but to be really effective ………ALL THE RUSSIAN BANKS SHOULD…

The facility in Natanz is built deep under a massive mountain, making it extremely difficult for the IDF to ever bomb it.

Iran is developing a new nuclear threat that could be a game-changer – and which will continue to proceed regardless of whether there is a nuclear deal or not.

It is a problem that almost no one is talking about, in an area called Natanz wherethe Mossadallegedly blew up two different nuclear facilities in July 2020 and April 2021 respectively.

The new enormous nuclear threat is a new underground facility Iran is digging and building in the Natanz area which goes so deep under a mountain so large that it will leavethe Fordow facilityin the dust in terms of how difficult it would be for the IDF to strike it.

In a report, Institute for Science and International Security president David Albright wrote…