On Friday’s ‘The Chris Salcedo Show’, Kash Patel explains how Michael Sussmann told him under oath that he went to the FBI on behalf of the Hillary Clinton campaign.

Joe Biden on Friday delivered remarks on the May jobs report from Rehoboth Beach, Delaware.

Quick recap of Biden’s speech: Putin price hike, Putin’s fault, Trump’s fault – but we have the best economy ever under my leadership.

Biden took off to his beach house in Delaware Thursday evening amid multiple crises.

The May jobs reportsignaled a slowing economy.

Friday’s Non-Farm Payroll report from the Bureau of Labor and Statistics (BLS) showed better initial numbers than expected for May but continues atrend of slower recoveryfor the U.S. economy in a season of record-high inflation.

The reportwas expectedto show that 350,000 jobs were added last month, with an unemployment rate… 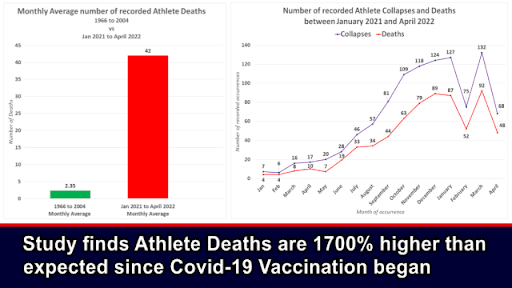 An investigation of official statistics has found that the number of athletes who have died since the beginning of 2021 has risen exponentially compared to the yearly number of deaths of athletes officially recorded between 1966 and 2004.

With the 2022 midterm elections around the corner, scrutiny of the 2020 election continues to raise questions about election integrity, including a newly identified anomaly in Maricopa County, Arizona. Arizona Law requires that, to be considered valid, ballots must be received by the county no later than 7 p.m. on Election Day. But newly uncovered […]

We soft pedal the problem of mean spirited and abusive news media criticism by calling it crusading journalism. However, if we take the time to observe that muckraking is a form of crusading journalism, that puts the matter into a more accurate perspective.

What is the primary incentive for the widespread practice of muckraking in today’s news media? Like most of the mass media, the news media is exists to attract an audience for advertisers. Muck provides cheap…

If you were to listen to leftist idiots, like Dean Obeidallah, who is nothing more than an attorney and a comedian (what a combination!), you don’t have a right to bear arms. That’s right. He says that the Second Amendment does not give you the right to own a gun. Let’s just take a look at what the Second Amendment to our Constitution says, shall we?

“A well regulated Militia, being necessary to the security of a free State, the right of the people to keep and bear Arms, shall not be infringed.”

And here’s what Obeidallah has to say about it.

“There is NO constitutional right to own a gun. That was literally made up by 5 GOP Justices in 2008 decision of DC v Heller. We need to make overturning Heller a cause like the right made overturning Roe v Wade. Between 1789 and 2008 NO federal court…

Look, we are all human. We all make mistakes. I get that and I certainly appreciate that. God knows, I’ve made more than my fair share of mistakes in my life. In fact, if you check with my wife, I’ve got to be in the top ten at mistake making!

But you don’t expect this from the so-called “experts”. Especially when they seem to be as well educated, and have held the high positions that someone like Janet Yellen has had.

And yet, she has now admitted, she was wrong about inflation.

Yes, Janet Yellen, former Chairman of the Federal Reserve, who’s only real job is to control inflation, and now the Secretary of the Treasury, has admitted that she was wrong about inflation.

This was Yellen on CNN: “I think I was wrong then about the path that inflation would take. As I mentioned, there have been unanticipated and…

Apparently, there is an internal war going on in the White House. Biden is out speaking publicly about a myriad of topics. As he does so, as the President of the United States, and the Commander In Chief of the armed forces, those words carry weight. And what has been happening more frequently, and we’ve talked about it here, is that the communications folks in the White House will walk back his comments, saying that’s not what he meant, or he is still following proper protocol, but his words were taken out of context.

For instance, when Biden was in Europe, and said that Putin could not remain…

Hosting Rafael Grossi for talks, PM urges use of ‘all means’ to prevent Tehran from getting nukes, accuses Islamic Republic of concealing atomic work with ‘false info and lies’

A statement from Bennett’s office said the premier warned International Atomic Energy Agency chief Rafael Grossi that Iran was pushing ahead on developing a nuclear weapon while misleading the world with “false information and lies” to conceal its work.

Bennett stressed the “urgent need” to confront Iran using “all means” to prevent it from acquiring nuclear arms, according to the Prime Minister’s Office. He also called for…