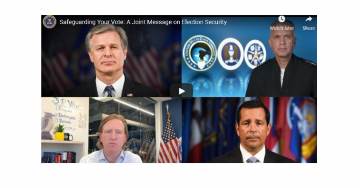 OVER several years — and with a paltry few conservative pundits and so-called Republicans raising any alarm bells — America’s security arms (domestic and foreign) have been in bed with liberal/globalist groups and their corporate back-benchers across the spectrum. Lock-step.

and so on and so forth.

IPSO facto, is it any wonder that in the run-up to the mid-terms, and in anticipation of a thrashing-like beat-down in 2024  — evidenced by the recent decimation of countless politicos within primary contests, yes, in league with radical leftist policies via a multiplicity of wrecking balls — that a hush-hush pow-wow (a month ago) at a Colorado gathering, that is, strategizing to arm themselves for battle ala force multiplier capacity??