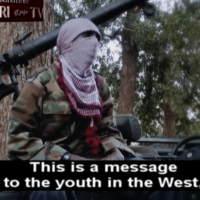 In a video entitled “Inspire Believers” that was posted by Al-Qaeda’s affiliate in Somalia, Al-Shabaab Al-Mujahideen, an English-speaking jihadi is calling upon Muslim youth living in the West to join Al-Shabaab, wage jihad, and seek martyrdom. He offers potential jihadis two different options:

In a video titled “Inspire Believers” that was posted on the Rocket.Chat server of Al-Qaeda’s affiliate in Somalia, Al-Shabab Al-Mujahideen (Al-Shabab) on January 19, 2022, an English-speaking jihadi called upon Western youth to join Al-Shabab, wage jihad, and seek martyrdom. A uniformed, armed, and masked Al-Shabab member also recited a poem urging Muslim youth in the West to join the jihad in Somalia or carry out “martyrdom-seeking” operations like the 2013 attack at the Westgate Mall in Nairobi.

Fighter:“By Allah, this path is one that needs patience. This is a path of the prophets, the martyrs, and the righteous. This path is not for everyone, people come and go. So I tell and I remind you. You think… Before you make hijra, you must be sure to give Allah the assurance that by Allah, you will wage jihad until you die. Because people come to jihad and leave jihad.