THE DECLINE & INEVITABLE DECIMATION OF THE U.S. AS A REGIONAL & GLOBAL SUPER POWER: AN ASSESSMENT; DAY ONE & ONWARD…..[VIDEO] By Adina Kutnicki

NO doubt, President Trump will go down in history — the non-revisionist kind — as the most pro-America, pro-freedom leader in the nation, as well as the west at large. The proofs are beyond manifest.

THAT being stated, it is also the case that the most intrinsic promise that he made — one which he hammered home until the bitter end to millions upon millions, mind you, a majority of the voters — to not allow the electoral steal to stand, well, it speaks for itself. Indubitably, the proof is in the inaugural pudding, and that can’t be wished away.

NOT only that, by failing to invoke the Constitution-backed  INSURRECTION ACT, duly underpinned by an EXECUTIVE ORDER signed in 2018, patriots can’t help but feel betrayed. Inexorably.

Executive Order on Imposing Certain Sanctions in the Event of Foreign Interference in a United States Election – TAILOR-MADE FOR “THE STEAL!” [EXPLANATORY VIDEO]

AS a matter of record, ever since VP Pence, a deep-state traitor, certified more than a handful of fraudulent electors on Jan. 6, lo and behold, the fascists who are now in TOTAL charge of the nation’s power centers have been touting the invocation of the INSURRECTION ACT against patriots! Talk about the widest open sesame that President Trump had to flip the script! But he didn’t. He caved. Understood?

ALAS, there is no way to sugarcoat this: The ever pugnacious POTUS failed to deliver the last knock-out blow, that is, to the illegitimate regime permanently ensconced in the White House; the heretofore People’s House! As per the real whys and wherefores, only Trump knows. But in the scheme of things, he understands that there will never, ever be a free election in America, again.

ATOP all of the above, as Commander-in-Chief, he had a sworn obligation to protect the Constitution — that which forbade him from handing over the reins to a fraudulent and illegitimately installed POTUS! Incontestably.

BREAKING: ARTURO D’ELIA CAUGHT: Head Of Italian Aerospace Company’s IT Department Used ‘Military Grade Cyber Warfare’ To Switch Votes ‘For Trump To Biden’ -ADMISSION VIA SWORN AFFIDAVIT! HOW DID HE DO IT? WHO WERE HIS HANDLERS? VIDEO EVIDENCE!!

IT is under an avalanche of bullet-proof evidence that a majority of Americans find themselves buried under, as well as feeling betrayed; having expected the POTUS, as promised, to stand strong when it counted the most.

BUT that was then and this is now. So, hard as it is, we must take a breath and a realistic, judicious step back from what could/should have been to stay focused.

TO wit, let’s  examine the wreckage — from DAY ONE.

DHS pauses some deportations for 100 days

The oldest president to take the oath, Joe Biden plans a frantic first day in power once his ceremonial swearing in is completed Wednesday. Some 17 executive actions and orders are ready for his initial hours in the Oval Office, designed to tackle everything from climate change to global poverty, all while he cancels the permit for the Keystone XL pipeline, Breitbart reports. Adina Kutnicki read more

CAUGHT ON VIDEO: Antifa/Left-Wing Provocateurs caught changing costumes to Trump attire to blend in and incite riots at Capitol protest.

Listen to nevertrump Frank poll done on Monday. 78% of Americans believe the election was stolen.

Well, the United States of America has just inaugurated, and out into office, the FIRST man in our history who was NOT elected by the people. Over 70% of Americans believe the election was rigged and 30% of those are Democrats. That means Joe isn’t YOUR president OR mine.

Well, the United States of America has just inaugurated, and out into office, the FIRST man in our history who was NOT elected by the people. Over 70% of Americans believe the election was rigged and 30% of those are Democrats.

That means Joe isn’t YOUR president OR mine. pic.twitter.com/CAs1EfyQ6w

These assholes say we are the problem and Trump incites violence.

@NickAdamsinUSA and @rebekah930
Awww heck let’s just go for four at once. 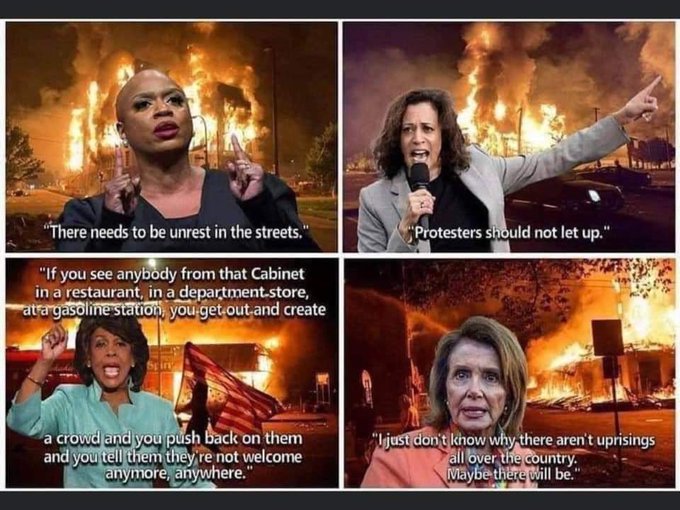 Katie Couric: Trump Supporters Need to Be “Deprogrammed” (VIDEO)
Nothing says unity like “deprogramming” the opposition. For ‘reportedly’ winning an election with 81 million votes Democrats sure are angry? Katie Couric wants Trump supporters “deprogrammed.” The…

We have not verified the validity of this video clip

Bizarre. Kamala Harris & Dems want to send anyone in Capitol Building riot to prison for many years, but Kamala & her pals bailed BLM rioters out of prison & encouraged them to riot, loot, burn some more in name of “social justice.” Rioting is fine, as long as you’re a Democrat!