For too long, Muslim apologists have asserted that a certain “Valley of Baca” in the Bible describes Mecca and that the Desert of Paran hints at Muhammad’s Arabia. Let us thoroughly analyze this and discover the truth.

On the 20th anniversary of the 9/11 attacks, let’s review the 40,000 terrorist attacks that have occurred since then, and discuss what we should have learned from them. For the complete list of deadly terror attacks since September 11, 2001, visit the Religion of Peace website: https://thereligionofpeace.com/

Like Loading...
Do not forget that the Muslim Brotherhood was the government that Obama/Biden/Clinton wanred during Obama’s Arab Spring. The same Arab Spring that was an Arab Winter in Obama’s mideast clusterfuck.

boudicaus@boudicaus
Egyptian TV Host: The Taliban Is The Essence And Culmination Of All Islamic Ideas; The Muslim Brotherhood Would Implement The Same Version Of Islam 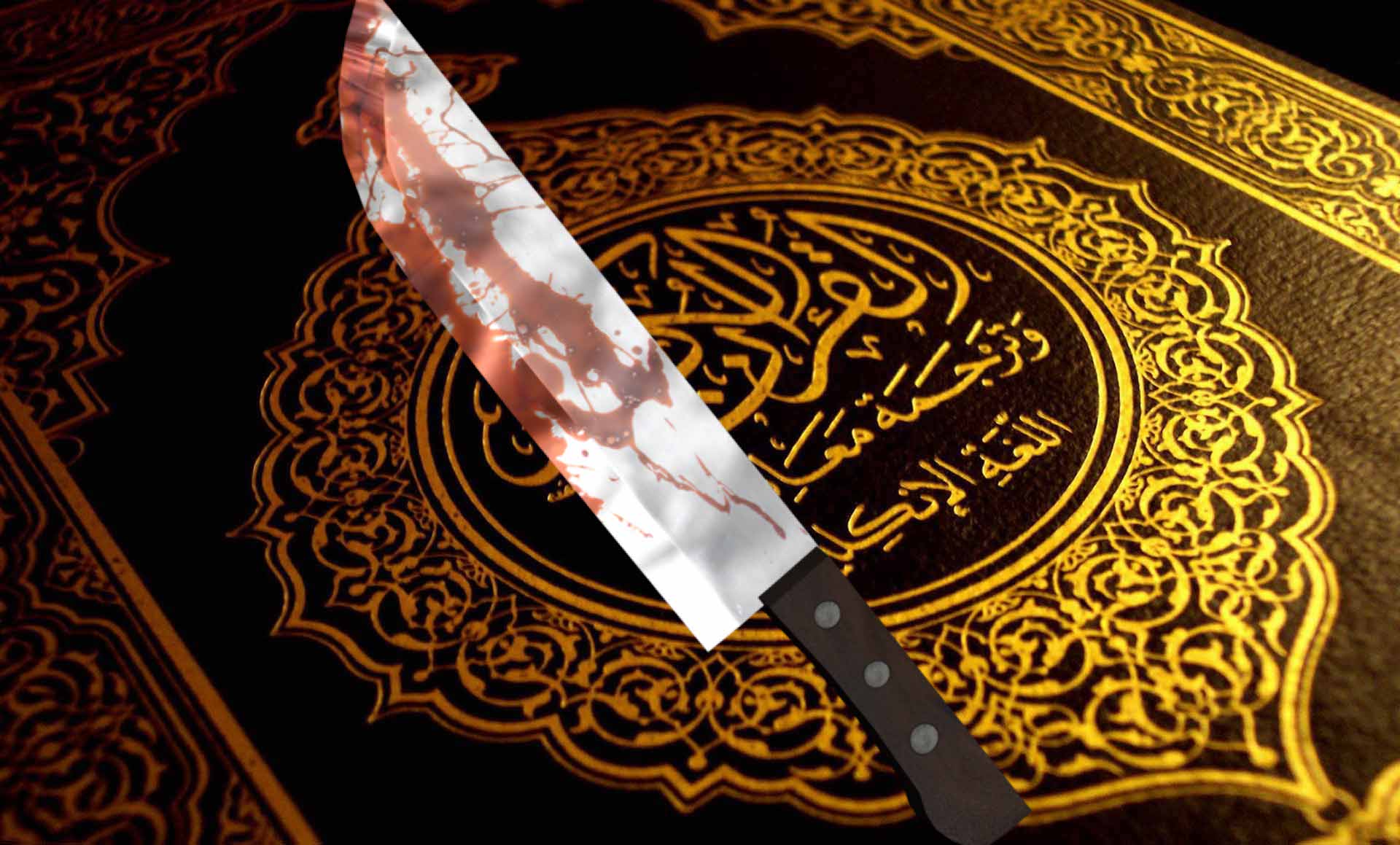 Egyptian TV Host: The Taliban Is The Essence And Culmination Of All Islamic Ideas; The Muslim Brotherhood Would Implement The Same Version Of Islam – Geller Report News

Geert Wilders Slams Dutch PM: ‘You have imported a monster called Islam into our country’

RAIRFoundationUSA Published November 17, 2020
Rumble — The Dutch House of Representatives held a debate on freedom of speech at the request of Party for Freedom (PVV) leader, Geert Wilders after the beheading of the French teacher Samuel Paty. Wilders slammed the open-borders policies of the Dutch Prime Minister, Mark Rutte for “importing a monster called Islam into our country, which has put our country in danger.”

Geert Wilders, who is thought of as, “The Donald Trump of The Netherlands”, opened the parliamentary debate with a summary of the islamic attacks and threats in recent weeks. He also addressed the call by Amsterdam’s imam, Yassin Elforkani, who just two weeks after the murder of Samuel Paty, began demanding the criminalization of insulting Mohammed. A petition was even launched by his fellow Imam, Ismail Abou Soumayyah insisting the government to adopt sharia blasphemy laws. The petition has currently been signed more than 125,000 times. Continue reading: https://rairfoundation.com/geert-wilders-slams-dutch-pm-you-have-imported-a-monster-called-islam-into-our-country-video/

In a new low, in the handling of the Afghanistan crisis, Joe Biden, speaking about hurricane Ida, refused to take questions about the biggest international crisis America has faced for decades.

There is no accountability with this man. You can see that the question about Afghanistan actually angered him, as he slapped his hand on the podium. Well he can be as angry as he likes. He’s not as angry as the mother of a Marine killed in the evacuation, who had the following withering assessment: “He is a feckless, dementia-ridden piece of crap”.

Not words I would use, but you can understand her anger. If that press conference wasn’t bad enough – remember this guy is always a no show, when faced with the tough questions. He’s no-show Joe. This gaffe prone president, in my view the most dangerous president in modern political history, could also barely conceal his boredom as he attended a ceremony for fallen US soldiers.

He was either checking his watch for the time, for the date, or perhaps he was worried about missing his favourite TV programme. Sesame Street.

Many say this man will not fight the presidential election in three year’s time. Frankly I don’t give him three months at this rate. In my view he lacks the judgement, the intelligence, and the cognitive health with which to deal with this ensuing crisis. And let’s check in shall we, with how it’s going with the new-look nicer, friendlier Taliban. You know, plant-based, woke Taliban 2.0.

Ground news report a folk singer was dragged out of his house and shot by the Taliban, after they banned music. And here is footage of a newsreader, with a couple of thugs behind him, with rifles slung over their shoulder.

I wonder how the BBC’s Huw Edwards would feel working under those circumstances. Seen enough yet? Whether we like it or not, America’s president is the world’s president. And need clear-eyed, brave leadership, as we deal with the consequences of the the catastrophic Allied withdrawal. In many ways the crisis has only just begun. Britain won’t be safe, America won’t be safe and the world won’t be safe until there is someone in the White House that’s actually up to the job. Don’t taker my word for it – the former commander of British troops in Afghanistan Colonel Richard Kemp, says the UK now faces it’s biggest terror threat in years. That’s why this matters. And it doesn’t stop there. There are now reports breaking that North Korea have restarted a nuclear reactor, that is believed to have produced plutonium for nuclear weapons, according to the UN. So do you see why leadership is so critical at this point in our history? Leadership that from the mask loving, high priest of progressive politics Joe Biden is so sorely lacking. No show Joe, has got to go.
https://www.gbnews.uk/gb-views/mark-dolan-biden-lacks-the-judgement-and-cognitive-health-to-deal-with-this-ensuing-afghanistan-crisis/122103

Rumble — In this episode, Dinesh reveals how Biden, like Jimmy Carter, has a hostage crisis, but both the administration and its allies in the media refuse to label it as such.  Pondering the vacuous effeminacy of Secretary of State Anthony Blinken’s public statements, Dinesh says we have met Nietzsche’s “last man” and his name is Blinken.  Author Mary Grabar joins Dinesh to pinpoint the falsehoods of the 1619 Project. Dinesh reflects on how the end of the American era, like the end of the Athenian era in the 5th Century BC, might arise out of a military disaster in a faraway place.

boudica us Published September 12, 2021 4 Views
Rumble — Not only did the Biden Regime leave $83 billion in US equipment, weaponry, aircraft, and vehicles in Bagram Airbase for the Taliban, they are also giving them highly advanced Air Force, Security, and Laser systems that currently are in Uzbekistan. What’s more, they intentionally allowed Americans to be stranded in Afghanistan so they could use them as an excuse (see 2nd video below) for transferring billions of dollars in “humanitarian aid” (aka ransom) to the Taliban.

As Taliban holds Americans ‘hostage,’ Biden admin says there’s little it can do

boudica us Published September 12, 2021
Rumble — As Taliban holds Americans ‘hostage,’ Biden admin says there’s little it can do ‘We do not control the airspace’

Kash’s Corner: With Many Left Behind in Afghanistan, What Should the US Do Now?

boudica us Published September 4, 2021
Rumble — In this episode of Kash’s Corner, Kash Patel breaks down what the United States should do now to rescue the Americans left behind in Afghanistan and why the United States must thoroughly vet all the individuals who were airlifted from Kabul.

“Knowing al-Qaeda, how they operate, knowing ISIS and how they operate … I don’t have access to the intelligence anymore, but I’m telling you, those guys are taking advantage of the airlifts out of there to place their operatives on these planes,” Patel says.

By Brian C. Joondeph
President Joe Biden and his team of military, intelligence, and diplomatic advisors oversaw America’s most epic surrender, on the world stage, under the lights and cameras of international media recording it for posterity, spinning the news to mitigate American failure.

One of many failures was the abrupt departure of American military and security forces, necessary to evacuate thousands of Americans and Afghan allies who placed themselves and their families at great risk by helping the Great Satan against the Taliban, the latter being the new boss, replacing the old boss.

How many Americans were left behind? Official government numbers are all over the map. The military, tasked with evacuating stranded Americans, was vague on the exact number.

US defense officials in charge of evacuating Americans from Kabul claimed on Tuesday morning they would fly 5,000 a day out despite only managing to rescue 1,400 in the three days since the city fell, while as many as 40,000 may remain stranded – some in remote parts of the country.

Pentagon spokesman John Kirby said on Tuesday morning that between 5,000 and 10,000 are in Kabul, but earlier admitted he had no idea how many there were or where they were. George W. Bush’s former Assistant Secretary of State, Robert Charles, says there are between 15,000 and 40,000 ‘scattered’ across all of Afghanistan.

In other words, the U.S. government has no idea how many Americans remain in Afghanistan. The same government had no trouble rounding up hundreds of “insurrectionists” strolling the grounds of the U.S. Capitol on Jan. 6, but in a country occupied by American forces for the past two decades, they have no idea how many Americans are in that country, most being paid in some form by the U.S. government, who they are and where they are.

If it was only President Biden who didn’t know, I would be sympathetic, as he can’t tell his wife from his sister and can’t remember the opening line of one of America’s founding documents. But the rest of Biden’s team? That’s pitiful.

Regardless of the exact number, it is safe to assume that there are many thousands of Americans, perhaps tens of thousands, still in Afghanistan, no longer protected by American soldiers or contractors; instead, at the whims of a fickle and hostile bunch of militant Taliban.

How many have made it back to America? Where are the interviews of returning Americans, telling their stories to Oprah or Ellen, or any of myriad cable news anchors and hosts? Where are the feel-good stories in People Magazine?

What about Oval Office or Rose Garden photos of grateful rescued Americans, posing alongside Biden with their relieved families? Remember President Obama with Bo Bergdahl and family in the Rose Garden? What the Washington Post described as a “sickening spectacle,” showing off a prisoner swap, Bergdahl for five Gitmo terrorists, four of whom are now senior Taliban leaders. Great trade, but Obama wanted the show. Yet no similar Biden show for rescued Americans?

Biden would love such a photo op. He could play the hero, bringing Americans home to safety, with the bonus of a target-rich environment for fondling and hair sniffing of young women and their children. But I have not seen such a ceremony. Why not? Where are the rescued and returning Americans? American Thinker read more