America, as a nation, is facing some of the most serious and extremely dangerous existential threats to Her very existence and the continuation of freedom and liberty for Her people. These are the most dangerous threat that I have ever witnessed.

Although the land will remain for many centuries forward, America cannot and will not exist as the free nation it once was so many long years ago. She cannot survive when half Her people, or perhaps even more, are fools and traitors who love not America or the principles upon which She was built.

America cannot survive a “president” and a Congress intent on giving away the bank and spending money just as fast as they can print and borrow it, and a Federal Reserve Bank that’s more than willing to keep the Ponzi scheme going until it can go no longer and the entire House of Cards comes tumbling down around everybody.

The Democratic Party Communists believe the sky is the limit when it comes to spending, and, in recent years, approximately two-thirds of the Republican Party, globalists, and statists have taken to spending outrageous sums, often in the trillions, like a baby seal takes to water.

Oh yes. We occasionally see a conscientious endeavor made to put the brakes on spending, as witnessed with Senator Joe Manchin bucking the Democratic Party Communists. However, even he and most Republicans were still willing to spend trillions more for Biden’s “Build Back Better” bullshit; it simply came down to a matter between nearly $2 trillion and $5 trillion or so dollars.

But who’s keeping count when it’s just a trillion here and a trillion there and just another day of driving the American taxpayer into the ground, taking their wealth and borrowing from Peter to pay Paul in order to keep the gravy train rolling for the ne’er do-wells and the takers and looters?

Who is keeping track when extreme government spending is creating a backdoor tax on all Americans through inflation that is more permanent than transitory? And in the meantime the debt ceiling keeps right on rising, adding more terrible limitations on the future of many generations to come.

America cannot survive Her fools and traitors who are actively pursuing an anti-American, sovereignty-killing Open Borders policy, in the manner of the Biden Regime, that gives lip-service to securing the border, while simultaneously continuing to allow ILLEGAL ALIENS to flood across the border. In a related matter, we have just witnessed the Mayor of New York sign a bill into law that allows Non-Citizen foreign nationals residing in the U.S., to vote in all future elections. One can make a logical assumption that this will include Illegal Aliens.

See the plan? These foreigners are being helped by the U.S. government in far too many instances through welfare programs, and it is the Democratic Party that continuously promotes this destructive policy, in order to build its base with more people who are previously inclined to vote for more socialism and Big Centralized Government, that typically takes its pound of flesh and an extremely heavy cost to individual liberty.

Furthering the destruction of America, one must surely wonder how America will survive in the face of so many outside threats from China, Russia, and a good portion of the Middle East, when Ol’ Uncle Joe and his Communist-driven, Communist-led regime are doing everything possible to hamstring America’s ability to respond in any effective manner. As a reminder, they’re doing this by destroying our energy independence — halting fracking and the building of pipelines in America and closing down oil exploration permits — without having any real or efficient alternative in place. And as if this isn’t bad enough, his regime is all too willing to engage in the appeasement of Islamofascists in Iran — begging for the return of the deeply flawed Iranian Nuclear Deal — as he warns China and Russia that he will hit them with “tough sanctions” if they move against Taiwan and Ukraine.

Ooowww. Tough sanctions after the fact. Biden has already hit China with sanctions over its abuse of the Uyghur Muslims in its domain, and yet, the Uyghur genocide is ongoing, just as its saber-rattling over international waterways in the South China Sea continues. Biden and Marx Inc are turning America into a weak, feckless paper tiger who has been declawed and defanged, and this is certain to invite a terrible attack on America in the not too distant future. Gen Z Conservative read more

boudica us Published December 17, 2021
Rumble — Communism by the back door

Two videos to watch All you supporters of communism are doomed. Antifa, BLM, Feminists Video 1 of 2

WHILE AMERICANS DROP, AFRICANS THRIVE! – WHAT YOU NEED TO KNOW!

Trevor Loudon: We are Experiencing a ‘Full on’ Communist Revolution

boudica us Published November 14, 2021
Rumble — Follow us and join Rumble. Use the following referral link

Trevor Loudon: We are Experiencing a ‘Full on’ Communist Revolution

“When I say ‘Revolution,’ I mean a full-on, socialist, Marxist revolution,” he said.

For the premier episode of his show Counterpunch, filmmaker and author Trevor Loudon explains that America is in the midst of a revolution. “When I say ‘Revolution,’ I mean a full-on, socialist, Marxist revolution,” he said.

Loudon’s shocking comments will come at little surprise to savvy readers, many of whom have family who suffered under communism before fleeing to America. Referring to the 2020 presidential election, Loudon states that the events taking place are “not an accident.”

The revolution is being driven by the Chinese Communist Party (CCP), who made it “very, very clear” that they did not want President Trump to be re-elected, Loudon said during the 27 minute broadcast. He explains that the CCP “deliberately spread” the coronavirus and used the very heavily compromised World Health Organization to encourage massive lock-downs.

Congress do the right thing 002

America is giving away the government and our institutions to communists. Many members of congress are allies of DSA, and some, like AOC, actively promotes their vision of global communism.

RAIR has compiled a startling collection of statements made by Marxists – including elected officials, union leaders and powerful international communists – during the Democratic Socialists of America’s (DSA) convention. 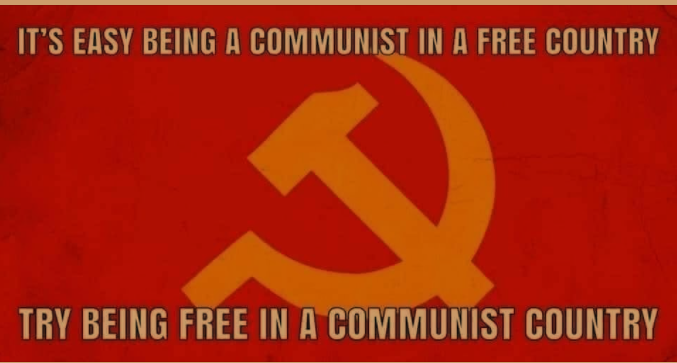 A dark academic ideology formulated in the 1970s is at the center of political debate today. And it will destroy the USA. Op-ed.

As globalist predators and their media lackeys crank up their propaganda machines to prepare the masses for another lockdown, perhaps as early as the fall, it’s imperative that we take stock of where we’ve been over the last 18 months and where we are heading if we allow them to do this to us again.

The below article by Ronald Yates adds historical perspective that is missing from today’s “news” reporting. If you compare the control measures implemented over the last 18 months with those used by authoritarian regimes throughout history you are automatically dismissed by the establishment as a “conspiracy theorist,” even when the same coercive tactics are being used to curtail freedom of movement, freedom of speech and freedom of religion. From the blatant censorship, the canceling of people’s jobs, careers and even bank accounts, to the dual justice system for those on one side of the aisle [Hillary Clinton, Antifa thugs and Hunter Biden] versus those on the other [Rudy Giuliani, Roger Stone, Gen. Michael Flynn and now Allen Weisselberg], it’s got all the makings of a techno-dictatorship hiding in plain sight, albeit masked beneath the veneer of “democracy.”

The term “conspiracy theorist” is used today for a reason — it shuts down debate and all serious evaluation of our current political climate, ignoring the biggest question of all — do we still live in a democratic republic?

Disclaimer: Ronald Yates is an Army vet, a journalist and a scholar. He does not deal in conspiracy theories.

I’ve noticed that whenever the subject of Nazi Germany is raised, someone always says something like this: “It’s unbelievable that Adolf Hitler was able to manipulate and control the entire German population.  It just seems impossible.”

Yet that’s exactly what he did.

Yes, there were some dissenters and political foes, but they were subdued and quashed as the boundless power of the Nazi regime shut down all dissent with the use of the brown-shirted Sturmabteilung or SA, the Schutzstaffel or SS, and the dreaded Gestapo or Geheime Staatspolizei.

Perhaps a bit of context is in order here.  I spent three years in Germany with the Army Security Agency involved in SIGINT (intelligence derived from electronic signals and systems used by foreign targets).  I am fluent in German, my wife is German, I have studied German history, and I keep up with current events in the country.

Like a lot of Americans, I always assumed that America was safe from the kind of tyranny the German people experienced under the heavy hand of the Third Reich.  There is no way our federal, state, and local governments could restrain and control the American people the way Hitler and his Nazis dominated the German population, I thought.

Yet, for the past 18 months, that’s exactly what has happened in America.

A nation that always prided itself on its independence and individuality was suddenly locked down.  Travel was restricted, schools and businesses were shuttered, we were commanded to wear face masks, voting laws were altered, isolation and quarantines were mandated, and speech was censored by social and mainstream media if Big Tech oligarchs judged what was said or written as “misinformation.”

It didn’t stop there.  A public health emergency was declared, borders were closed, and large gatherings were forbidden — including church attendance, funerals, and weddings.

In short, civil liberties that Americans had always taken for granted were suspended by those in power, just as the Nazis rescinded the rights of the German people, including a free press guaranteed by Germany’s Weimar Republic (1918 to 1933).  The German press quickly complied with its new masters.

Joseph Goebbels, Nazi Germany’s Minister of Propaganda, had no use for a free press and once said, “Think of the press as a great keyboard on which the government can play.”

Alter that quote a little, and you have a passage more relevant to American social media today: “Think of social and mainstream media as a great keyboard on which Big Tech oligarchs can play.”

We know what that “certain purpose” is.

During Biden’s socialist regime, the legacy media’s goal is to promote socialist policies and protect our feckless president from all criticism — the same objective that Goebbels was tasked with during Adolf Hitler’s reign.

No doubt Goebbels would be proud of America’s Big Tech oligarchs.  They are performing the same tasks in 2021 America that Goebbels performed during the 12 years of the Third Reich. LeoHohmann.com read more