Why Biden Wants a War in Israel
Daniel Greenfield, a Shillman Journalism Fellow at the Freedom Center, is an investigative journalist and writer focusing on the radical Left and Islamic terrorism. Terrorists have only one thing to… 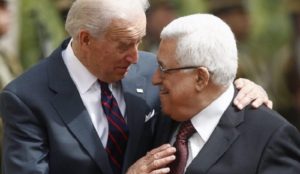 Daniel Greenfield, a Shillman Journalism Fellow at the Freedom Center, is an investigative journalist and writer focusing on the radical Left and Islamic terrorism.

Terrorists have only one thing to offer. It’s right there in the name.

The business model of terrorism is killing people and then demanding a payoff. The game always works the same way. The terrorists attack, their targets fight back, and a third party sends in the diplomats to negotiate on behalf of the terrorists before they get hit too hard.

The Islamic terrorist war against Israel has worked exactly this way for generations.

Like a radio pop song that plays every time you go into a supermarket, you know the next verse and can feel the next beat before it even kicks in no matter how much you hate the music.

It’s the same way with the regular mini wars that begin with a manufactured political provocation that can be blamed on Israel, (this time a court ruling evicting illegal Muslim colonists occupying homes that were seized during the ‘48 ethnic cleansing of Jews from Jerusalem), followed by terrorist violence with the usual pattern of attack and escalation.

Hamas and a few of its allies shell Israeli towns and cities using the latest Iranian technology and some of their own cruder models. Israel responds by calculatedly taking out terrorist compounds which Hamas has, with equal calculation, filled with civilian human shields.

Politicians, the media, and social media (three distinctions without a difference) rush to attack Israel, vastly inflating the already inflated casualty figures put out by the terrorists, lying about the nature of the conflict, and doing their best to mainstream antisemitism a little more.

The Biden administration makes a few public statements vaguely supporting Israel’s right to defend itself, an absurd point, and sends in mediators to negotiate the payoff for the terrorists.

Israel had a brief break from America acting as the paymaster and bagman for the terrorists.

It was a refreshing pause especially for all the children who didn’t get bombed, the homes that didn’t have rockets smash through their roofs, and the soldiers who didn’t get shot just so that State Department negotiators could tell Israel the current going rate for ending the attacks.

Islamic terrorists aren’t crazy or irrational. The average suicide bomber might be, but their leadership doesn’t do anything without a profit motive.

The profits for Islamic terrorism against Israel come in two ways.

This never leads to peace because if you keep rewarding terrorists for ending the violence, you’re also telling them that if they do it all over again, they’ll profit from the violence.

But the essence of the peace game is obliviousness. That means believing that there are root causes that can resolve the underlying grievances. The root cause is the existence of Israel.

The terrorists want to destroy Israel: Israel doesn’t want to be destroyed.

And the negotiators came up with a compromise which satisfies no one: a two state solution that will only destroy a part of Israel. The solution, which has solved nothing and will solve nothing, incrementally destroys parts of Israel by handing them over to the terrorists.

The amount of Israel being destroyed through this process has kept on increasing ever since the original fake peace deal was celebrated by Bill Clinton, Yasser Arafat, and Yitzchak Rabin at the White House. Every exchange of fire leads to a push for a new peace “compromise” that will destroy even more of Israel by handing more territory over to the terrorists.

Since this process provides the terrorists with zero incentive to stop the violence, it failed.

The Trump administration overturned conventional wisdom by recognizing that the terrorists, who had repeatedly rejected and sabotaged peace negotiations for two generations, not the Israelis, who had shown up for every bad faith attempt at negotiations, were the problem.

Instead of taking away territory from Israel and giving it to the terrorists, President Trump began recognizing Israeli claims to parts of Israel, while cutting off money and political support from the terrorists. The terrorists didn’t turn pacifist, but they turned down the violence because they understood that Secretary of State Mike Pompeo, unlike Kerry, wouldn’t be bailing them out.

They just waited, while Kerry privately assured the terrorists Trump would soon be gone.

The leverage of terrorists is terrorism.

Rebooting the old negotiating process requires a war. And so the Biden administration turned on the money tap to the terrorists and their Iranian sponsors. It made it clear that Saudi Arabia, the UAE, and the anti-Iran coalition linked to the Abraham Accords were out of style in D.C.

Biden also appointed Hady Amr, a veteran of Qatar’s Brookings operation, a state backer of Hamas, as his “point man” on the “Israeli-Palestinian conflict” which had been low on conflict.

At least the conflict had been low until Biden got started. Jihad Watch read more