Christian Student Stoned to Death and Set on Fire for Blasphemy

Deborah Emmanuel Yakubu, a Christian student at Shehu Shagari College of Education in Sokoto, Nigeria, was beaten, stoned to death, and her body set on fire by Muslims shouting “Allahu Akbar.” She was killed over a false accusation of blasphemy against Muhammad.

UKRAINIAN refugees waiting in Poland refuse to be resettled in Sweden

UKRAINIAN refugees waiting in Poland refuse to be resettled in Sweden; Swedish bleeding hearts are shocked!

No surprise here, the reason they give is their fear of all the Muslim migrant gangs there and their well-known reputation for crime and rape of Swedish women.

The Islamic State is Back . . . in America

The dire cost of Biden’s weakness.

The Islamic State (ISIS) is back. Five years after Donald Trump entered the Oval Office and quickly brought about the destruction of its caliphate in Iraq and Syria, ISIS is resurgent and wealthy. Could this have anything to do with Old Joe Biden’s misrule? Of course.

To be sure, there are other factors at play as well. An Iraqi security official said Friday that “recent assessments … put the group’s reserves at between $25 million and $50 million.” That could be a conservative estimate: the Wall Street Journal reported in September 2020 that ISIS had “assets ranging into the hundreds of millions of dollars across the Middle East and Central Asia,” according to “officials and government records.”

The Iraqi official said that ISIS got its cash from “opportunistic extortion, looting and kidnap for ransom,” but those are not the only sources of the jihad terror group’s income. WSJ added that ISIS “still extorts local populations in areas it controls or has supporters; receives income from businesses it seized during its rule; and collects payments from human trafficking.” It also controls “a growing share of illicit tobacco markets in Pakistan and Afghanistan.” Nor is even that all: “donors in several Middle Eastern countries work on raising funds,” says the WSJ, in an understated reference to wealthy Muslims around the world who believe that ISIS is a worthy Islamic organization and keep it afloat financially with substantial donations.

On Friday, the group announced that it had chosen a new caliph, the brother of the former ISIS caliph Abu Bakr al-Baghdadi, who was killed in a U.S. raid in 2019. The new top dog is Juma Awad al-Badri, a.k.a. Abu al-Hassan al-Hashemi al-Quraishi, succeeding Abu Ibrahim al-Quraishi, who blew himself up to avoid being captured in a U.S. raid in Syria in February.

They all call themselves al-Quraishi because they claim to be members of the Quraish tribe, the Meccan tribe of Arabia to which Muhammad, the prophet of Islam, belonged. To be a Quraish is a prerequisite of being the caliph, or successor, that is, Muhammad’s successor as political, military, and spiritual leader of the Muslims, and that prerequisite is non-negotiable, leading people such as Juma Awad al-Badri to fabricate a lineage back to the Islamic prophet

Yet although they fancy themselves as seventh-century warriors, these guys are not remotely just fantasists. ISIS has been advancing all over of late. It is active in Mali, where either ISIS or al-Qaeda (both jihad groups are active in Mali) recently attacked an army base, murdering 27 soldiers and injuring 33 more. They have “seized vast swaths of the Malian countryside,” according to Reuters, and have expanded their operations into neighboring countries. In late February in Nigeria, the Islamic State West Africa Province (ISWAP) slaughtered 25 people. In Mozambique, ISIS is such a formidable presence that South Africa, Rwanda, Botswana, Lesotho, Angola, and Zambia have sent troops to combat it there. None of those countries is anything close to being a military powerhouse, but it’s still noteworthy that forces from six countries have to come together to fight a threat that most people assumed had been decisively defeated several years ago and would fade into the background.

The group has designs not just in Africa, either. Homeland Security Today reported in late February that ISIS had posted a video online urging Muslims in the United States to join “ISIS North America.” FRONTPAGE MAG read more 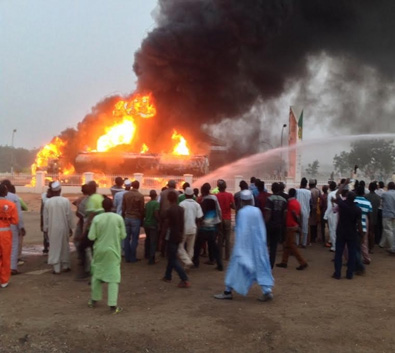 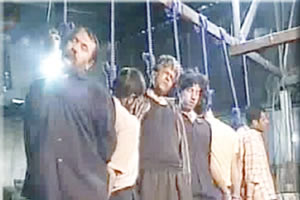 On This Day…
Mar 14, 2011: Evin, Iraq
A Christian and Jewish couple are hanged for their beliefs: 2 Killed 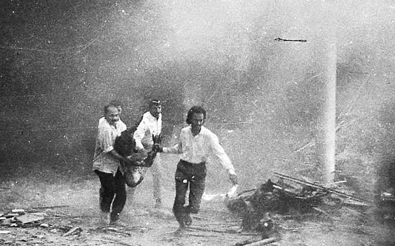 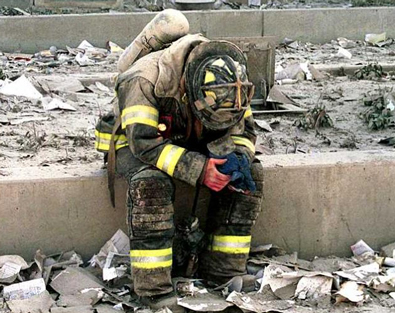 9/11 Terrorist, known as the “20th Hijacker” has been released from Guantanamo Bay prison by Joe Biden

“This is a serious threat to national security and the security of our allies,” says Florida Republican Senator Marco Rubio who joins families of 9/11 victims to slam Biden for releasing 20th terrorist hijacker back to Saudi Arabia for so-called “mental health treatment.” 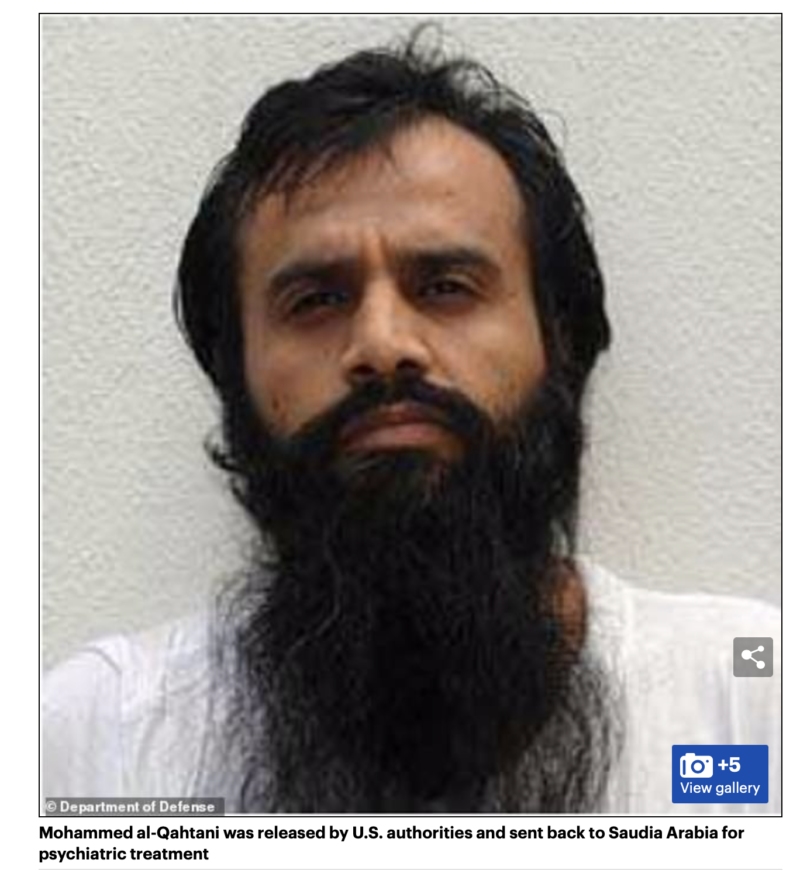 Daily Mail (h/t Mita) Would-be terrorist Mohammed Ahmad al-Qahtani, 46, who reportedly missed boarding a plane to fly into the World Trade Center because he was detained by authorities on immigration charges, was shipped back to his native country, Pentagon officials said Monday.

‘Al-Qahtani is a terrorist who made it his life goal to kill Americans,’ Rubio said. ‘I believe he remains committed to jihad and the destruction of the United States.’

‘Now, because of the Biden Administration’s misguided policies, he has the opportunity to once again return to the battlefield. The decision to transfer al-Qahtani is not simply a lapse in judgment, it is a massive error which poses a serious risk to our national security and the security of our allies.’ 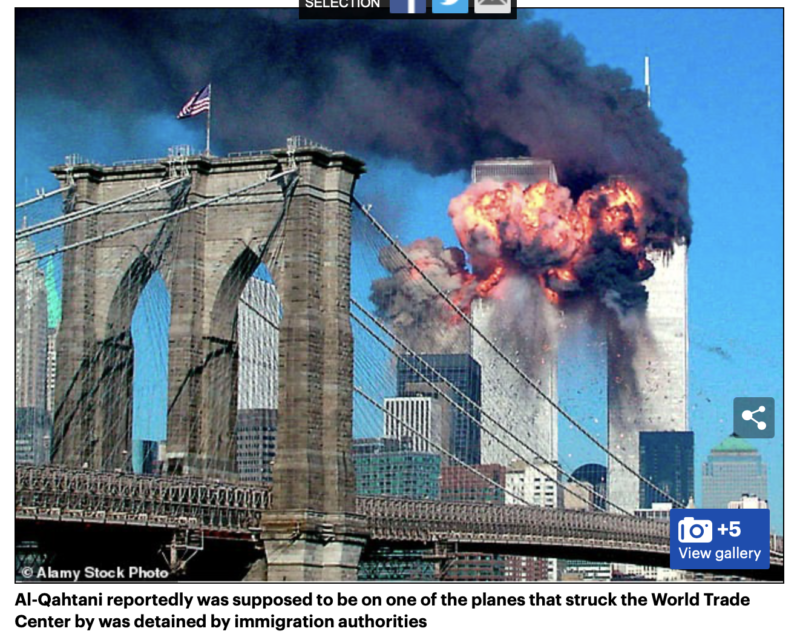 Al-Qahtani’s release, which was approved last month by Secretary of Defense Lloyd Austin, comes as the Biden administration puts pressure on Saudi Arabia to release more oil amid the crisis in Ukraine.

Angela Mistrulli, whose father Joseph died in the World Trade Center on 9/11, said that she was frustrated at the lack of due process. ‘I think it’s very said to be a child of someone who was killed on 9/11 not to have a day in court for my father and the 3000 other people who were murdered,’ she said. ‘I find it more and more that they are taking away are ability to prosecute and get the truth.’