THOSE of us who are properly schooled in Islamic terrorism have no doubt that the war being waged against Israel/Jews (and the west in general) is underpinned by a hybrid, that is, Koranic-based texts, backed-up by political Islam.

BUT for a scholarly understanding of the aforementioned war-mongering, look no further than to “Islam & Blood.” It spells out all of the gory, devastating truths re Islam’s basis, sans any PC sanitation and Allah-washing.

IN a nutshell, it is a centuries-long war to the death — until every last Jew is gone from the face of the earth. In no small measure, this is precisely why the Mufti of Jerusalem partnered with Hitler to exterminate the Jews. A natural collaboration made in hell. Crystal clear. Adina Kutnicki read more Adina Kutnicki read more

On the other hand, countries like Hungary, Poland, Slovakia, and the Czech Republic reject diversity (aka Muslim migration) and as a result have some of the lowest crime and rape rates in Europe. Bare Naked Islam read more

An Added Dimension to the Iranian Menace – By Adina Kutnicki, Israel National News

It is Washington’s top-tier which led/paved the way to a nuclear-armed Iran.

Few possessing even a modicum of intellectual integrity, let alone an ounce of strategic acumen, can argue that the looming specter of a nuclear-armed Iran isn’t a mortal threat to Israel’s survival. Similarly, in no uncertain terms, to America.

Iran’s terrorist mastermind Mullahs make no pretense as per their main targets:”The Big Satan” and “The Little Satan.” As the twin pillars of western civilization, these two dominoes must collapse to garner hegemonic rule over the West, and, by extension, their Islamic Sunni rivals. And herein lies the paradox: Whereas both are centuries-long enemies, at times, they place aside their enmity in their war against Israel and the West …. the enemy of my enemy is my friend. There is no higher priority/obligation for both streams. It is a 24/7 obsession.

Indeed, while Sunni nations and Europe are also in their direct cross-hairs, dealing with them plays second fiddle to the “two Satans” – and in an exponentially lower order of magnitude. Basically, once the latter are decimated, as a knock-on effect, the otherwise covert or overt assistance via Israel or America becomes a defacto moot point. Thus, the aforementioned second-tier target banks will fall into line in short shrift.

But despite the grim geo-strategic outlook, there is reason for hope. As many predicted, the current crop of Israel’s misdirected decision-makers have been given the boot – never mind Bennett’s bravado. Most acutely, in relation to matters of domestic and foreign strategic import, his regime has failed the (Zionist) test. The Bennett-Lapid-Abbas “arrangement” has proven that appeasing the political king-maker of the Israeli Branch of the Muslim Brotherhood can never be relied upon to safeguard Israel as the Jewish national homeland.

Which brings today’s analysis straight to the jugular. On the one hand, recently, the world witnessed a display of political theater orchestrated by the current “caretaker” regime, and, on the other, increasingly hostile actions taken by Israel’s heretofore ‘best friend’, the United States, yet, it barely rated any mention – neither by Israel’s politicos or the back-benching media. Why is this? After all, it is Washington’s top-tier which led/paved the way to a nuclear-armed Iran! Yes, a highly incendiary charge, yet wholly supportable.

Whereas the timing of Bennett’s (May 31, 2022) presentation re Iran’s looming danger was wholly appropriate – attesting to the TOTAL deception of its genocidal mullahs, that is, in expectation of the (June 2) visit by the IAEA Chief, why did Bennett present the Iranian treasure trove (captured in 2018, during Netanyahu’s tenure) in a manner in which one could perceive it as a feat to his strategic prowess?

The fact that Bennett is in lock-step with the dictates of a demonstrably hostile Biden regime (as exhibited within Zionism Imperiled, Israel National News, Nov. 14, 2021) must be internalized as non-disparate from other dangers.

Strategic-wise, the re-treads from Barack Hussein Obama – ensconced within the top perches of the Biden administration – directly dovetail and segue into the ‘charge of all charges’: How the United States led the way to a nuclear-armed Iran!

Back in 2015 – during Obama’s obsessive détente with Iran’s genocidal regime – it didn’t seem unusual to be asked to join a ‘working group’ to ferret out what’s what. Thus, the “House Of Bribes: How The United States Led The Way To A Nuclear Iran” was birthed.

More specifically, its basis can be extracted within the below excerpt, but its bullet-proof findings must be read here.

The Iranian nuclear deal is a full capitulation to Iran’s terrorist mastermind Mullahs, and the latest in a series of betrayals of the American people and allies by the Obama administration. At the highest level of the administration, Barack Obama’s Senior Advisor, the Iranian-born Valerie Jarrett, prioritized rapprochement with the terror state. Adina Kutnicki read more

Acts17Apologetics
David Wood and Robert Spencer bring you the latest news about the global jihad (with special attention given to the Nupur Sharma controversy and the Ilhan Omar backlash)!

SHAME ON INDIA! Government throws Hindu spokesperson under the bus for stating facts about the Prophet Muhammad that Muslims find offensive

India’s ruling party, BJP, has suspended Nupur Sharma, who has been receiving death threats from outraged, overly sensitive Muslims for simply stating a fact: ‘The Prophet Muhammad married a 6-year-old child when he was 54.’ Sharma has been at the receiving end of the virulent hatred and death threats from Muslim extremists and ‘far-left-secular’ journalists for expressing her views on the ‘paedophile’ behavior of the Prophet Muhammad. 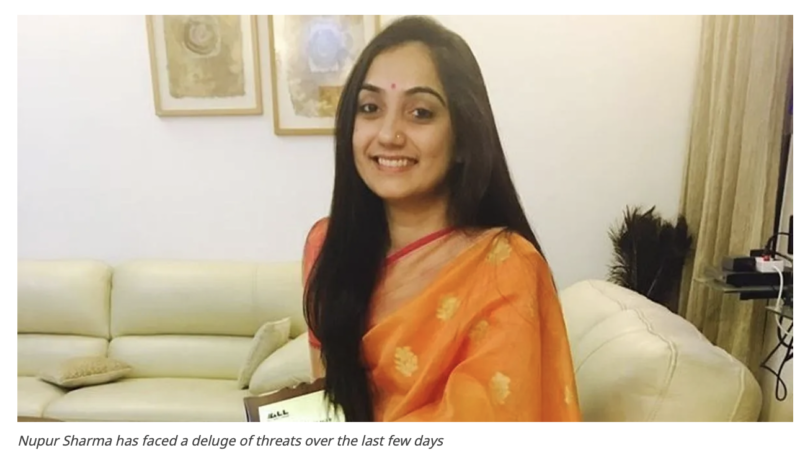 OpIndia (h/t LH) On June 5, Bharatiya Janata Party suspended National Spokesperson Nupur Sharma and Naveen Kumar Jindal from the party’s primary membership. The development came after a recent press release issued by the party. The party respects all religions and is against any ideology that insults or demeans any sect or religion.

In its suspension letter, the BJP told Sharma that she has expressed views contrary to the party’s on various matters which violate the party’s constitution. Bare Naked Islam read more

The more you try to appease violent Muslims, the more violence and threats of violence you get from them

Take the recent uproar by Muslims in India over a few alleged ‘insulting’ remarks about Prophet Muhammad made by two BJP ruling party officials. Despite apologies from India’s leaders and suspension of the so-called “blasphemous” officials, Al-Qaeda has risen from the dust, threatening suicide bombings in major Indian cities to avenge the alleged insults (aka facts) to Mo. Bare Naked Islam read more 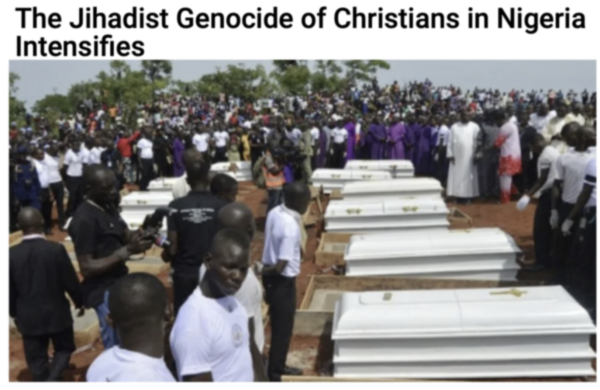 Gatestone Institute by Raymond Ibrahim The United Nations recently named March 15 as “international day to combat Islamophobia.” That date was chosen because it witnessed one of the worst terror attacks on Muslims: on March 15, 2019, an armed Australian, Brenton Tarrant, entered two mosques in New Zealand and opened fire on unarmed and helpless Muslim worshippers; 51 were killed and 40 wounded. Not only has this incident been widely condemned throughout the Wes, it has also caused the UN to single out Islam as needing special protection.

This response, however, raises a critically important question: if one non-Muslim attack on a mosque is enough for the UN to institutionalize a special day for Islam, what about the countless, often worse, Muslim attacks on non-Muslim places of worship? Why have they not elicited a similar response from the UN?

First, the phenomenon of Muslim persecution of Christians is real: it’s unwavering, constant, systematic and systemic, and it conforms to sharia-approved patterns — meaning its root source is Islam.   As I wrote back in 2011 in the very first report,

Whatever the anecdote of persecution, it typically fits under a specific theme, including hatred for churches and other Christian symbols; sexual abuse of Christian women and misogyny; apostasy and blasphemy laws; theft and plunder in lieu of jizya; and over all expectations for Christians to behave like cowed dhimmis.

boudicaus@boudicaus
BIDEN REGIME “warns” Israel NOT to go ahead with the normalization of relations with Sudan, per the ‘Abraham Accords’

BIDEN REGIME “warns” Israel NOT to go ahead with the normalization of relations with Sudan, per the ‘Abraham Accords’

Or WHAT? If Biden has his way, he will try to dismantle the great success Israel has had in the normalization of relations and implementation of extensive trade and investment deals with the UAE, Bahrain, and Morocco, thanks to the Trump-brokered Abraham Accords.

Christian Student Stoned to Death and Set on Fire for Blasphemy

Deborah Emmanuel Yakubu, a Christian student at Shehu Shagari College of Education in Sokoto, Nigeria, was beaten, stoned to death, and her body set on fire by Muslims shouting “Allahu Akbar.” She was killed over a false accusation of blasphemy against Muhammad.